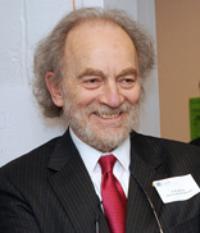 With more than 550 publications to his credit, Arthur H. Heuer, Kyocera Professor of Materials, is a world-renowned leader in his field. Both the Cleveland Museum of Art and the Louvre have called upon his expertise to characterize the Renaissance ceramics in their collections. Elected to the prestigious National Academy of Engineering in 1990, he has pioneered numerous studies in materials science, including application of electron microscopy to engineering ceramics, development of strong and tough ceramics, biological ceramics, solid oxide fuel cells, oxidation and hot corrosion of structural alloys, and interstitial hardening of stainless steels.

His long collaboration with Swagelok Corporation has led to technological breakthroughs and an endowment for the Swagelok Center for Surface Analysis and Materials (SCSAM), an internationally renowned materials characterization facility. Heuer founded the center early in his career and continues to serve as its director.

Heuer joined the faculty in 1967, one month after CWRU was formally federated, and has an impressive record of securing research funding, including nearly $10 million in state and federal funding through his collaboration with Swagelok alone. He invariably involves graduate students in his research, having trained more than 100 masters' and doctoral students and nearly 60 postdoctoral fellows in materials science.

Heuer was named University Professor in 2001 in honor of his accomplishments in the lab, classroom and university community. He chaired the committee that was tasked with revitalizing the role and developing the honor of Distinguished University Professor. Additional awards include Case Western Reserve's Frank and Dorothy Humel Hovorka Prize in 2008, the 2008 W. David Kingery Award from the American Ceramics Society (ACerS) and the 1997 ASM Gold Medal.

He is an external member of the Max Planck Society in Stuttgart, Germany, a Visiting Professor at Imperial College London, and is a Fellow of the American Ceramic Society, the Institute of Physics (UK), the Materials Research Society, and the American Association for the Advancement of Science.