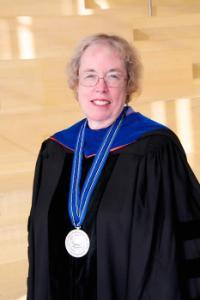 Barbara Daly is more than a nurse educator; she’s a nurse philosopher.

Her life’s work has focused on remedying the moral and ethical issues doctors and nurses face in treating the sickest of the hospital’s sick—the critically, chronically ill and cancer patients.

“Their diagnoses and hospitalizations are life-altering moments,” she said. “Life is never the same again for these patients or their family.”

The average patient in a large urban hospital feels like a stranger in a strange land, Daly said, raising questions about what’s important for both health care workers focused on treating the disease and patients who are more than an ailing body.

The real challenge, she said, is to give patients the most advanced technical care in a manner that does not depersonalize or dehumanize them among the medicines and machines.

Daly’s work focuses on finding ways to accomplish such sensitive, respectful care as the Gertrude Oliva Perkins Professor of Oncology Nursing at the Frances Payne Bolton School of Nursing and director of Clinical Ethics at University Hospitals Case Medical Center.

And during Fall Convocation at 4:30 p.m. Wednesday, Aug. 27, in Severance Hall, she will add another prestigious title: Distinguished University Professor, joining a select group of extraordinary Case Western Reserve scholars.

“Barbara Daly is a true distinguished faculty member who has made outstanding contributions in studying the care of the chronically, critically ill,” said Mary Kerr, nursing school dean and May L. Wykle Endowed Professor. “As rapid advances in knowledge and technology have taken place in health care, ethical considerations in their use have not kept pace. She has been a major force in addressing these issues.”

Daly has made it her personal mission to help patients find meaning in life, no matter what lies ahead for them. She works with their families, too, who suffer and experience their own personal struggles of watching someone they love go through the process of recovery or dying.

The quest began with her first research project after graduating from the nursing school with a Master of Science in Nursing and joining its faculty in 1976. She also earned a master’s and PhD in philosophy from Bowling Green State University.

Watching chronically ill patients linger in the intensive care unit (ICU) after the initial crisis abated, she envisioned a Special Care Unit that offered acute individualized care for these patients. With the help of others, the idea became a reality at University Hospitals. The approach became a model of care and evolved into long-term, acute-care hospitals.

Daly said she has managed to accomplish such important changes—many systematic improvements that have become embedded practices of care—by collaborating with others.

A recent research project focused on caregiver support that begins when the cancer patient receives an advanced cancer diagnoses. These caregivers receive much-needed information and psychological and spiritual support through, for many, the end of a patient’s life. The research found that surviving caregivers welcomed the support.

Daly has led or co-led more than $13 million in research funded by the National Institutes of Health. The projects focus on making systematic changes to improve patient and caregiver experiences. These enhancements also benefit doctors and nurses who face the challenges of providing patient-centered care in fast-paced and sometimes economically constrained work environments.

Daly also has contributed to advancing the understanding of approaches to providing comprehensive care of patients with cancer. While detailed information about cancer tumors are logged into a national tumor registry, she realized that little is known about how a patient’s emotional state might affect the cancer.

Her idea for a Psychosocial Data Registry for Persons with Cancer and their family caregivers was the first of its kind. The registry tracks patient reports on anxiety, depression, hopefulness, positivity and other emotions. Combining the emotional and physical information might reveal why some patients survive their cancers and others don’t, she said.

Moving forward, Daly said the database will be incorporated into a Biorepository and Registry bring developed by a team of nurses, doctors, and information technologists at UH’s Seidman Cancer Center to track blood, tumors and the emotional state of patients.

Daly’s vast contributions to nursing also include leading a task force that rewrote the American Nurses Association’s Code of Ethics in 1996-2001.

Under her leadership, the code brought to the forefront several major issues facing nurses at that time, many now accepted, she said.

Among the issues: compulsory management of end-of-life pain symptoms; staging a nursing strike only when all other channels to solve hospital work-environment problems fail; and defining the boundaries for the nurse-patient relationship.

“While this Distinguished University Professor award recognizes the importance of my work, it also reflects the accomplishments of a wonderful team of researchers, patients and families who have contributed over the years to our understanding of how to care for the critically ill,” Daly said.