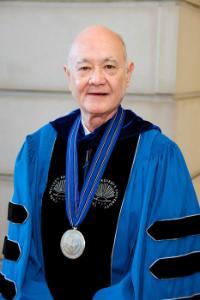 When Chung-Chiun Liu left Case Western Reserve University more than 40 years ago with his doctoral degree, he never considered he might one day become colleagues with the esteemed professors under whom he studied.

"I was hoping to get a faculty position in the U.S. when I graduated, but at that time, I never thought of CWRU, for I knew that CWRU already had Professor John Angus, who was much more knowledgeable than me," Liu said.

Instead, he headed two hours east of Cleveland to University of Pittsburgh, where hed accepted a position as an assistant professor. After 10 years, he returned to Cleveland, and 33 years later, he was among the most revered professors at CWRU. His knowledge, innovations and contributions to the university—and to his academic field—have been recognized, earning him the university's highest honor for members of its professoriate.

Liu earned his doctorate in chemical engineering from CWRU in 1968, following bachelor's and master's degrees in the same subject from National Cheng Kung University in Taiwan and California Institute of Technology, respectively. After studying under prominent CWRU faculty members such as Angus and Ernest Yeager, he spent a decade on the faculty of the University of Pittsburgh before returning to Cleveland to join the CWRU faculty as a full professor of chemical engineering.

Now, Liu serves as the Wallace R. Persons Professor of Sensor Technology and Control and director of the university's Electronics Design Center. His research spans multiple areas, including electrochemical engineering, microelectronic materials and fabrication processes. He uses his knowledge in these areas to develop miniature electrochemical and biomedical sensors, among other products.

"Professor Liu's work in sensors, systems and electronics is legendary, and he is internationally regarded for his extraordinary contributions to those fields said Case School of Engineering dean, Jeffrey L. Duerk. "He is the quintessential example of what value a Distinguished University Professor brings to this institution."

More than 2,000 undergraduate students have benefited from his teaching, as have more than 60 doctoral students and 40 visiting scholars and postdoctoral fellows whom he has advised and mentored.

This personal interaction with students has proved Liu's most rewarding experience.

"I am very grateful that CWRU provides me the opportunity to teach, research and mentor students," he said—noting that he still maintains personal relationships with many students and follows their personal and professional development. "Their successes reflect the greatest accomplishment of my teaching career."

But Liu is not focused only on undergraduate and graduate student success. He is also dedicated to advancing science education before students reach the college level and has worked with middle school and high school students in enrichment programs in science, technology, engineering and math. In addition, he spearheaded the development of an international collaborative education program with his alma mater in Taiwan, National Cheng Kung University.

Liu became director of the Electronics Design Center, a research center and microfabrication lab, in 1985. Since then, it has become a valuable resource for his fellow researchers, as well as for students. Under his guidance, renowned institutes such as NASA have benefited from innovations in the Center.

Liu said he leads the center with three specific goals in mind:

Throughout his career, Liu has authored more than 220 peer-reviewed journal publications and holds 17 U.S. patents. In recognition of his achievements, he has received numerous awards and honors. He is a fellow of the Royal Chemistry Society, the Electrochemical Society and the American Institute of Medical and Biological Engineers. He is also the recipient of the Presidential Award for Excellence in Science, Mathematics and Engineering Mentoring, the Outstanding Achievement Award from the Electrochemical Society and a number of awards from CWRU.

Earning the Distinguished University Professor title, though, stands out for Liu as a career accomplishment.

"I am humbled by this appointment," he said, "...and I really appreciate the support I have received from my colleagues."