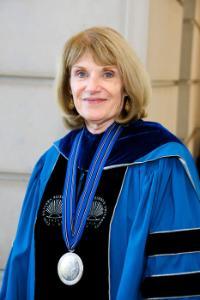 Claudia Coulton conducts research with two goals: to identify issues in urban areas and to solve them. Time and again, her scholarly findings have prompted concrete leadership changeswhich in turn have improved the lives of the people she studies.

For example, when the Center for Urban Poverty and Community Development—which she directs—released a report showing Cleveland's inner-city residents couldn't get to available jobs in the outer-ring suburbs via public transportation, the Greater Cleveland Regional Transit Authority adjusted its routes. Coulton's research showed the major role disadvantaged neighborhoods play in people's lives, leading to systemic issues such as lack of access to education, jobs and food as well as income inequality and health disparities. Inspired by this research, she founded the National Neighborhood Indicators Partnership—a 35-city collaboration that develops and supports the use of neighborhood research in local policymaking and community building.

Coulton, the Lillian F. Harris Professor of Urban Social Research at the Jack, Joseph and Morton Mandel School of Applied Social Sciences, first became inspired to study urban poverty during the height of Martin Luther King's Poor People's Campaign. The movement raised her consciousness to the issues of persistent poverty, especially those of access to education, health and jobs, and led her into the field of social work. She earned a bachelor's degree in sociology from Ohio Wesleyan University and a master's in social work from The Ohio State University before earning a doctoral degree at Case Western Reserve University.

She joined the Mandel School faculty in 1978, and 10 years later Coulton and the Mandel School received a grant from the Rockefeller Foundation and Cleveland Foundation to fund research into community conditions and how to improve the plight of those in distressed neighborhoods. This led to the creation of the Center for Urban Poverty and Development, which drew praise from leading scholars of the day and catapulted Coulton to the forefront of social work research.

From there, Coulton helped develop the National Neighborhood Indicators Partnership, in which 35 cities across the country use the metrics collected on neighborhood quality to encourage systemic change. Having the research empowers people at all levels, from governmental organizations to grassroots associations, she noted.

"Research can show how much neighborhoods matter, and by putting these metrics and tools in people's hands we can help change their situations," Coulton said. "We've done that here in this region, and I'm pleased I was a founder of the national partnership as well."

Coulton's work has been published and referenced in numerous journals. In fact, her 1995 article describing the relationship between community factors and child maltreatment has been cited nearly 500 times. She's also been recognized with numerous awards, including the Bruel Memorial Prize—awarded annually for the best article in Social Service Review. She was selected as the Aaron Rosen Endowed Lecturer at the Annual Conference for the Society for Social Work and Research in 2004 and inducted into the American Academy of Social Work and Social Welfare in 2010.

"Professor Coulton is a stellar academician who possesses a record of outstanding accomplishments. She brings rigor, innovative methods and a multidisciplinary approach to addressing significant issues of concern to the profession and to society," said Mandel School Dean Grover C. Gilmore. "She is also one of the most humble and generous faculty in the academic community. Her colleagues, students and staff are quick to praise her for a leadership style that encourages them to draw on their own knowledge and talents, which has resulted in a superior product and a willingness to work together harmoniously."

Coulton's caring, encouraging nature is evident in the classroom, and it's been recognized with the university's John S. Diekhoff Award for Graduate Teaching. One of her favorite aspects of her career is mentoring students, which she's done as an academic adviser and research supervisor to numerous graduate and doctoral students.

"It's a very special experience when you work with and mentor students who do great work herebut then go out to do even greater work when they leave," Coulton said.

The reward for Coulton comes through knowing not only has she helped change lives, but she's helped develop others who can do the same.