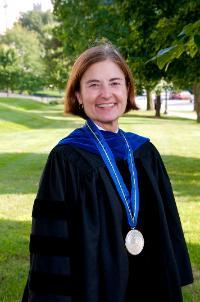 Cynthia M. Beall, PhD, S. Idell Pyle Professor of Anthropology, is internationally recognized for her work on the biology of people who live at high altitudes. She joined the Department of Anthropology at Case Western Reserve University in 1976 and immediately began a series of pioneering field studies into the ways in which Andean, Tibetan and East African highlanders respond to and thrive in their stressful native environments. She was the first to thoroughly document the use of different biological pathways by Andean and Tibetan highlanders. Additional research has detected natural selection occurring in modern Tibet and identified a key role for nitric oxide gas at high altitude. Her work has attracted continuous federal funding since 1981 and resulted in more than 60 publications in scientific journals, as well as numerous invited book chapters and presentations. She has been recognized with election to the U.S. National Academy of Sciences and the American Philosophical Society.

In her own disciplines, she has served as:

In addition to a teaching schedule that includes introductory and upper-level class instruction, directing the steering committee of the evolutionary biology program, developing programs in anthropology and global health, undergraduate and graduate advising, Beall has also served on the following university committees:

Beall also played a key role in the development of Science Cafe Cleveland—an informal public forum for the open discussion of current issues in science.