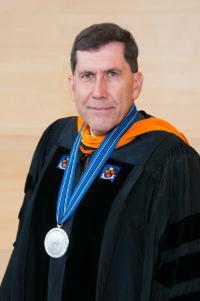 His favorite aspect of his multifaceted role—and the reason he came back to Case Western Reserve—is teaching.

After graduating from Case Western Reserve University, Feke went on to Princeton University to pursue a doctorate in chemical engineering. There, he took a teaching assistant position during his second year and discovered his passion. With no prior teaching experience, Feke was given the added responsibility of preparing and delivering lectures to his students.

“I really enjoyed communicating with students and seeing them learn,” Feke said. “If not for that experience I’d probably be working in the industry today.”

But Feke bypassed industry and returned to his hometown of Cleveland and his alma mater, Case Western Reserve, where he took a position as an assistant professor of chemical engineering in 1981.

“I enjoy seeing students become excited about a topic,” said Feke, now a full professor. “It happens every time I teach and that interaction is what I find most rewarding.”

Thirty-five years later, the mark Feke leaves on his students is apparent, as he is a two-time winner of the student-nominated Carl F. Wittke Award for Undergraduate Teaching.

Aside from contributions in the classroom, Feke has been a critical member of the university’s administrative team since 1997, when he was appointed associate dean for academic affairs for the Case School of Engineering. Other positions he has held through the years include vice provost for planning and assessment (2002-2005), acting dean of graduate studies (2004) and interim chair for the Department of Chemical Engineering (2008-09).

Serving in his current position since 2005 as Vice Provost for Undergraduate Education, Feke has taken on the arduous task of guiding Case Western Reserve through two institutional accreditation processes—first in 2005 and again this past year. The critical process includes gathering campus feedback, collecting evidence documents and writing reports that clearly present the university’s mission, programs, and operations to the North Central Higher LearningCommission.

As a researcher, Feke primarily focuses on the behavior of small particle systems and how to make them behave in controllable or unnatural manners, with the ultimate goal of improving their processing characteristics or function. He has developed chemical and physical strategies, such as the use of resonant ultrasonic fields, for various particle-processing applications, such as separating pollutants from water using less energy than traditional methods.

Feke’s extensive research is represented by more than 120 peer-reviewed journal articles and book chapters, six patents and more than 140 presentations given around the world.

His work in advancing the chemical engineering field and commitment as a teacher have been acknowledged with several prestigious awards and fellowships, including the Office of Naval Research Young Investigator Award, and his election as a fellow of the American Institute of Chemical Engineers.