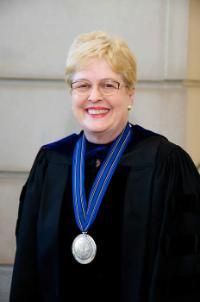 As a renowned scholar on elderly care issues, Eva Kahana has won countless awards from national and international organizations. Yet the news that she had been named one of the Case Western Reserve University Distinguished University Professors took her entirely by surprise.

"They say that people far away might recognize one's achievements more readily than those who are next door, so I think it's very unique when the colleagues you work with day in and day out feel the work you've done merits such recognition and nominate you for such a great honor," said Kahana, the Pierce and Elizabeth Robson Professor of Humanities and Sociology.

Kahana's accomplishments throughout her 28-year career at CWRU are many. So it's no surprise her colleagues in the College of Arts and Sciences—as well as those in the Frances Payne Bolton School of Nursing, the Jack, Joseph and Morton Mandel School of Applied Social Sciences and the School of Medicine, all in which she holds secondary appointments—are impressed by her drive, intellect and consistently cutting-edge ideas.

"Professor Kahana is internationally known for her sustained program of innovative and well-funded longitudinal research based at the Elderly Care Research Center," said Cyrus Taylor, dean of the College of Arts and Sciences. "A distinguished teacher and mentor, Professor Kahana is also a role model for faculty, particularly for women, with a record of success and effective leadership as chair of the Department of Sociology for nearly 20 years."

An influential scholar who has published more than 170 journal articles or book chapters, co-authored two books (with two more in production) and edited three volumes, Kahana's research focuses on finding new ways to improve life for older people. Her work—especially as director of the university's Elderly Care Research Center—has been recognized as breaking new ground in the understanding of resilience among elderly and disabled persons living with trauma

"When I got started in [my research], this was a very fledgling new field, so it was a new area of inquiry. I really got in on the ground floor," Kahana said.

Kahana has received continuous funding from the National Institutes of Health since 1969. She has been principal investigator of more than two dozen research grants, with budgets totaling more than $16 million. In addition, Kahana has earned many awards throughout her career, including:

She also was the first female awarded an honorary Doctor of Humane Letters from her alma mater, Stern College for Women (now part of Yeshiva University). But her most memorable and meaningful honors, she said, relate to her work as a mentor. She's earned national recognition with the Distinguished Mentorship Award from the GSA, as well as campuswide attention with the John S. Diekhoff Award for Graduate Teaching, which recognizes exemplary contributions to the education and development of graduate students.

"I really do value getting across to the next generation of students and researchers the importance of curiosity and love of the subject matter, Kahana said. One of the biggest joys at my career stage is when you see your previous students being honored at national conferences, see them heading up an institute or getting a special appointment, and then remembering what they were like as a student and feeling like you helped play a role in [their success].," Kahana said.

Not only has she helped inspire her students, but she's also set an example for her two children—both of whom are alumni of CWRU and are now academics. The two follow in the footsteps of Kahana and her husband, Boaz—a professor at Cleveland State University—with whom she regularly conducts research, ”often just for fun," she said.

"We are kind of happy workaholics. Our work is also our play she said. It may sound odd, but there's nothing I like more than sitting and discussing an interesting research article with Boaz on a Sunday morning over coffee."