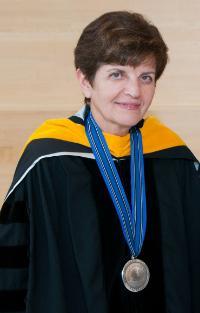 Ica Manas-Zloczower has spent her entire professional teaching career at Case Western Reserve University. In her 30 years on campus, she’s become known as a prolific researcher in macromolecular science and engineering, a committed colleague and an influential educator.

Manas-Zloczower’s esteemed career all began with an early love for math and physics. As a way to combine her two passions, she sought out engineering, which would allow her to learn about phenomena in science and use that understanding to create new devices and methodologies. Teaching, she remembered, always seemed to be the right way to harness that love of engineering.

“I always thought that I had a call to teach and to try to help other people understand the basics and fundamentals of science and engineering,” she said. “I think it was always within my heart to become a teacher.”

Manas-Zloczower earned her bachelor’s and master’s degrees from the Polytechnic Institute of Jassy, Romania, and her PhD from the Technion-Israel Institute of Technology. After she completed her studies, Manas-Zloczower worked for two years as a post-doctoral fellow at the University of Minnesota. When the opportunity to come to CWRU as an assistant professor emerged in 1985, she was excited by the prospect of not only becoming a faculty member, but also of coming to such a well-regarded institution.

“I knew that Case Western Reserve was a great school,” she said. “I knew that this department was focusing on polymers, which was my specialty. I knew I wanted to build a teaching and research career [at CWRU].”

Through the years, Manas-Zloczower has proven herself as a researcher and teacher, becoming a full professor in 1994 and being appointed the Thomas W. and Nancy P. Seitz Professor of Advanced Materials and Energy in 2012. Her work has focused primarily on the polymer processing and engineering field. Currently, Manas-Zloczower is exploring how natural biobased ingredients can be used to develop advanced materials for renewable energy. Her research has far-reaching applications that could improve everything from wind turbine blades to cars.

“I want to make materials that function better and can sustain harsher conditions, but at the same time are made from materials that are bio-based,” Manas-Zloczower explained. So her research looks at how chemical or physical modifications to a material’s makeup affect its response.

A leader in the macromolecular engineering field, she’s served as president of the International Polymer Processing Society and editor-in-chief of the Journal of Polymer Engineering. Manas-Zloczower was the first woman to present plenary lectures at polymer engineering international events: The International Rubber Conference, in Paris, France (May 1998), The 15th Polymer Processing Society International Conference in ‘S-Hertogenbosch, Netherlands (June 1999), and The Technical Plenary Lecture at 2014 ANTEC- Society of Plastics Engineers Conference in Las Vegas (April 2014).

Manas-Zloczower has more than 145 publications in peer-reviewed journals, more than 100 published conference proceedings and a number of book chapters. She is also an author and the editor of Mixing and Compounding of Polymers 2E: Theory and Practice, which was published in 2009. Over the years, she has given over 80 plenary, keynote and invited lectures and more than 100 invited seminars at universities and companies worldwide.

As a professor, Manas-Zloczower has worked extensively mentoring other faculty within the Case School of Engineering. During her five years as the associate dean of faculty development, she mentored young faculty and worked to inspire a community atmosphere and encourage faculty recognition for their accomplishments. But the most gratifying moments of her career have been realizing the lasting impression she’s left on her students. Years after having them in class or as advisees, she still receives thank you notes from students whose careers were shaped by her guidance.

“I learn more from my students, perhaps, than I learned from my teachers,” she said. “I enjoy working with them. I enjoy challenging them and being challenged at the same time.”