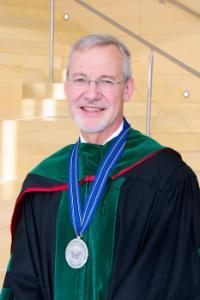 At the time, Kazura was surrounded by Robbins and other physicians and scientists devoted to improving the health of people in developing countries. Their dedication made a lasting impression on Kazura, inspiring his passion for global health.

Kazura, professor of international health, medicine and pathology, channeled that passion over the decades to pursue advancements in the understanding of genetic and immune mechanisms underlying infectious diseases that affect the health and socioeconomic well being of impoverished populations in Africa, Asia and Latin America.

Eventually, his global health research and education endeavors led to his current position as director of the Center for Global Health and Diseases. His leadership has greatly contributed to CWRU, earning the rank as No. 1 among universities nationally in global health education in a poll published in The New York Times.

“I was exposed to the immense impact of infectious diseases at a global level at a critical time in my career,” Kazura said. “Dean Robbins, along with Ken Warren, Adel Mahmoud and Chuck Carpenter, inspired young physician scientists to gain first-hand experience with the major causes of ill health and death that disproportionately affect poor people in the developing world. Experiences made possible by them changed my perspective on what I wanted to do with my career. Global health was an easy sell,” Kazura said.

His research has focused mainly on lymphatic filariasis—a mosquito-transmitted worm infection that causes debilitating swelling of the extremities (elephantiasis), and malaria—a leading killer of children in the tropics. His research findings have appeared in such important biomedical journals as The New England Journal of Medicine, Lancet and Nature.

Kazura’s current research on human immunity to malaria is integral to the development of a vaccine for the disease. Additionally, his contributions are key to the global effort to eliminate filariasis by 2020 through mass drug administration and vector control.

“If you had told me 25 years ago that filariasis could be eradicated during my lifetime, I would have said that was unrealistic,” he said. “Now we know that transmission of infection by mosquitoes can be stopped permanently.”

Kazura has served on multiple National Institutes of Health study sections and expert panels for the World Health Organization, and has held leadership positions in the American Society of Tropical Medicine and Hygiene, completing a term as president in 2012.

Under Kazura’s leadership, the Center for Global Health and Diseases applies $9.5 million in annual research and educational funding not only to the CWRU campus, but also to partners in Kenya, Papua New Guinea, the Solomon Islands, Brazil, Madagascar, Ghana and Côte d’Ivoire.

“It’s gratifying to work on finding solutions to health issues that affect not only American travelers and military personnel overseas, but also nearly two billion people living in the tropics where these infections are endemic,” Kazura said. “It’s a two-way street that benefits the health of all.”

Kazura has served as a mentor for more than 30 years to graduate and medical students, post-doctoral PhD and MD scientists and junior faculty. His work has captured the scientific and humanitarian sentiments of undergraduate students as well.

“All you have to do is expose students to global health issues, and the need for action speaks for itself,” Kazura said. “For example, in some areas of Kenya, 20 percent of women of reproductive age are infected with HIV. When students see this firsthand, it is easy for them to buy into global health as something they might want to spend part of their lives doing and contribute solutions for.”

He credits collaboration at CWRU for its stature as a global health leader. Kazura has worked hard to establish such teamwork by “internationalizing” educational, scholarship, service and research activities at the university. He was instrumental in creating the interdisciplinary Global Health Alliance among the College of Arts and Sciences, Frances Payne Bolton School of Nursing and School of Medicine. The Alliance established innovative courses for undergraduate, graduate and professional schools students addressing multidisciplinary approaches to improving human health on a global level.

“A key advantage is that the School of Medicine is located on the same campus as the other schools, which greatly facilitates the interdisciplinary interactions,” he said.

“This is a highlight of my career,” Kazura said. “I feel honored that the university recognizes global health as a worthy academic career goal.”