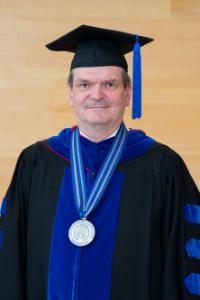 Dr. Krzysztof (Kris) Palczewski is John H. Hord Professor and Chair of Pharmacology at the Case Western Reserve University (CWRU) School of Medicine. He is a vision scientist, internationally recognized for his contributions to: 1) understanding the basic molecular events that initiate vision in the vertebrate eye, 2) elucidating the structural biology and pharmacology of G protein-coupled receptors (GPCRs), 3) identifying new drugs for the treatment of inherited retinal diseases, and 4) discovering novel imaging methods to view the human retina for the early detection of disease.

Kris’ contributions to science are widely recognized as evidenced by more than 550 scientific articles published in such respected peer-reviewed scientific journals as Nature, Science, and Neuron, Proceedings of the National Academy of Sciences, the Journal of Biochemistry and the Journal of Clinical Investigation. The impact of his research is extraordinary with an h-index of 98 and over 35,000 citations (Google scholar).  He also holds 22 patents and is the recipient of several international awards including the 2015 Bressler Award in Vision Science and the inaugural 2014 Beckman-Argyros Award in Vision Research.  He is the only scientist to win both the Cogan Award for the most promising young vision scientist (1996) and the Friedenwald Award for continuously outstanding ophthalmology research (2014), each awarded by the Association for Research in Vision and Ophthalmology.

Highlights of Dr. Palczewski’s research include: the crystallographic determination of the structures of the native and light-activated GPCR, rhodopsin; the discovery and molecular description of critical phototransduction and visual cycle proteins; and the development of promising therapeutics for disparate blinding diseases.

In addition to solving the crystal structure of rhodopsin, with implications far beyond the visual sciences, contributions from the Palczewski lab also include molecular studies of rhodopsin kinase, protein phosphatase, and arrestin and their involvement in regulating activated rhodopsin. Dr. Palczewski also discovered new proteins associated with the phototransduction pathway, including the GCAPs involved in regulating the synthesis of cyclic GMP and, thereby, the return of photoreceptor cells to dark-adapted conditions. Another breakthrough from the Palczewski lab involved determining the structures and enzymatic mechanisms of key enzymes involved in the regeneration of rhodopsin, such as retinoid isomerase RPE65 (together with Dr. Philip Kiser). These findings led to the identification of small compounds such as 9-cis-retinal which can circumvent mutations in RPE65 and mitigate the blinding phenotype in a model of the childhood disease Leber congenital amaurosis. Dr. Palczewski also showed that exposure to primary amines diminished the effects of excess all-trans-retinaldehyde resulting from mutations in the ABCA4 gene, which underlies the Stargardt form of early onset macular degeneration. Now the Palczewski lab and collaborators are making groundbreaking advances in 2-photon imaging of the human eye to recognize biochemical perturbations before structural alterations arise, thus improving the early detection and stratification of patients for individualized healthcare.

Dr. Palczewski is particularly recognized as the first scientist to solve the crystal structure of rhodopsin, one of the prototypical G-protein coupled receptors (GPCRs).  His seminal publication in Science (http://www.ncbi.nlm.nih.gov/pubmed/10926528) has been cited more than 5,000 times, and for many years it was the single model structure for all GPCR research.  By solving the first GPCR structure, Kris built the foundation for understanding the mechanisms of and the modulating potential of GPCRs; and as recognized by the 2012 Nobel Prize committee, “About half of all medications achieve their effect through G protein-coupled receptors.”

During his tenure over the last decade as the Chair of Pharmacology at CWRU, Dr. Palczewski has recruited 16 new faculty members. The Department also is well funded, having a high percentage of faculty (80%) with active, national research grants covering various disciplines from structural biology to cancer biology and including translational research. The Department fosters cutting edge technology by housing the High Throughput Screening Core Facility and the Cleveland Center for Membrane and Structural Biology (directed by Dr. Phoebe Steward). The Department also has achieved an outstanding record for teaching (efforts led by Drs. John Mieyal and Amy Wilson-Delfosse,, and several of its faculty hold leadership positions at CWRU (e.g. Dr. Ruth Keri, vice-Chair of the Pharmacology Department and Associate Director for Basic Research at the Case Comprehensive Cancer Center). Department faculty also provide service at the national and international levels in peer-review study sections (NIH and private foundations) and in leadership roles within professional organizations.

Dr. Palczewski’s awards include recognition from the Polish Academy of Science (1978, 1985); Polish Ministry of Education (1986); a Jules and Doris Stein Research to Prevent Blindness Professor (1992–1999); the Cogan Award, Association for Research in Vision and Ophthalmology (1996); Humboldt Research Award for Senior U.S. Scientists (2000); Alcon Research Institute Award (2001); Tom and Sandy Trudell Research Award, the Foundation Fighting Blindness (2007); Knight's Cross of the Order of Merit of the Republic of Poland (2011) from the Polish Senate; The Roger H Johnson Macular Degeneration Award (2012); the 2012 Award from the Foundation for Polish Science (the highest ranking research award in Poland); the Case Western Reserve University Distinguished Research Award (2013);  the Friedenwald Award (2014) from The Association for Research in Vision and Ophthalmology; Distinguished Fellow of Polish-American Scientists honored by the Kosciuszko Foundation's Collegium of Eminent Scientists; the 2014 Maurice Saltzman Award, Mt. Sinai Health Care Foundation, Cleveland;the 2014 Beckman - Argyros Award in Vision Research (intended to reward individuals who are making significant transformative breakthroughs in vision research); and the 2015 Bressler Vison Research Award. Recent honors also include recognition by the 2015 Polish Academy of Arts and Sciences (foreign member); Guest of Honor by the American Academy of Ophthalmology (2015); ARVO Silver Fellow (2016), and most treasured, a 2016 Distinguished University Professorship at CWRU.

Kris has made seminal scientific contributions to the biology and chemistry of vertebrate vision.  As summarized by the American Academy of Ophthalmology in 2015, “The [AAO] is thankful for his monumental contributions to the understanding of the biochemistry of vision in health and disease…”  And perhaps most satisfying to Kris is the knowledge that his science and philosophy of research will continue into the next generation through his training of over 100 graduate students, medical students, post-doctoral fellows and other associates.