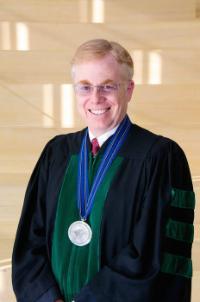 Relationships are a pillar of Kurt Stange’s personal and professional philosophy. He cultivates them in his practice of medicine, when working with fellow faculty across the university, and advocates for their critical role in the health of individuals and communities.

That personal, collaborative spirit has been essential to Stange’s career since he was a high-school student in East Rochester, New York. There, his teacher, Jane Kunzog—with whom Stange still stays in touch today—taught him the importance of approaching science and health as inextricably linked to people and their experiences. That lesson stuck with him through degrees at Dartmouth, the Albany Medical College, the University of North Carolina School of Public Health and a residency at Duke University.

Focusing on what he calls “helping whole people to be healthier” and “looking at the larger picture and community” has helped Stange accrue numerous awards throughout his career. This focus carried him through everything from election into the prestigious Institute of Medicine to becoming founding editor of the Annals of Family Medicine. Now, he will add one more honor to his list of accomplishments: Distinguished University Professor.

The permanent, honorific title recognizes the outstanding contributions of full-time, tenured professors with exceptional academic records of research, scholarship, teaching and service. Keeping Kunzog’s teachings in mind, Stange says that the award is a humbling recognition of longstanding relationships built in 26 years at Case Western Reserve University. He notes in particular “how easy it is to collaborate across departments, schools and with groups.”

In that vein, Stange has created partnerships not only across every school at CWRU, but also between the university and community partners. Specifically, he has worked to advance cooperation among disparate factions in research, and has taken strides to create a venue that encourages all involved parties to consider research relevant to health care policy and interventions. The Cancer Center and Clinical & Translational Science Collaborative have been important recent partners in these efforts.

One early example of this collaborative drive to integrate, personalize and contextualize health care is the Direct Observation of Primary Care Study, conducted in collaboration with a network of 84 local family practices. The study was groundbreaking in bringing to light family practice’s multi-faceted nature. The study led to 70 scientific articles—one of which has been cited in more than 200 further publications.

Similarly, his team’s effort to evaluate the country’s first national demonstration of the patient-centered medical home illustrates Stange’s commitment to innovative ways to approach patient care. Deflecting praise, Stange claims that he is always “trying to think about how to help people to make things better and improve them in a different way.”

In 2011, Stange—as well as one senior faculty member at each of CWRU’s eight schools and the county health commissioner—were awarded one of Provost William A. “Bud” Baeslack III’s Forward Thinking awards to establish Promoting Health Across Boundaries This initiative is an ambitious collaboration with the goal of advancing knowledge and practice of boundary-spanning activities that enable health. It is focused primarily on promoting understanding at the boundaries between: individuals and families, primary health care, health care systems and communities. As a result, the initiative is fostering new partnerships across the university and community.

As a family physician, Stange has allowed his path to grow organically, with ebbing from medical student education, resident education and research. He has launched the Case Comprehensive Cancer Center program in prevention and population research, and is now working at the interface of public health, community and health care. It’s Stange’s social capital within CWRU’s community which has allowed him to stay true to his true north.

“I want to help people follow their own star, individually and collectively; to make things better and to understand the past, but not be limited by it,” Stange said.

This can be said for the many students and researchers he has mentored and for his desire to help people be healthy, not by treating one disease at a time, but by trying to understand people in their community and relationships. As he shares, “People aren’t healthy in isolation, they’re healthy in families and communities. Health care isn’t a commodity, it’s a relationship.”

His research and education ability, mentoring skills, unselfish leadership, collaborative excellence and his community engagement—in academia, both nationally and around the world—has helped Stange to join a long line of Distinguished University Professors.