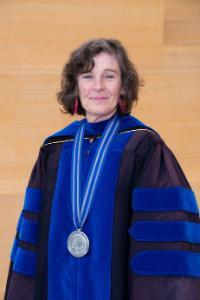 Barkley, the M. Roger Clapp University Professor of Arts and Sciences, is a leading researcher in the field of biophysical chemistry.  She has developed and applied innovative approaches to investigate protein and DNA structure and interactions.  Her work has provided invaluable data for computer simulations of protein properties.  Barkley has published more than 60 scientific papers, several of which shed light on the process by which anti-AIDS drugs inhibit reverse transcriptase, a viral enzyme that catalyzes the first step in the replication of HIV.

A faculty member since 1996 and chair of the Department of Chemistry since 2008, Barkley has long been an influential mentor and advocate for women and underrepresented minorities in the sciences.  She was the first woman professor at Case Western Reserve in the chemistry department, and also the first woman to hold an endowed chair in the natural sciences.  In 2003, she played a decisive role in creating ACES (Academic Careers in Engineering and Science), a university program funded by the National Science Foundation to increase the percentage of women holding faculty and leadership positions in science and engineering programs.

Barkley is a past president of the Biophysical Society, which presented her with its distinguished Service Award in 2003.  In 2015, she received the American Chemical Society's Stanly C. Israel Regional award for Advancing Diversity in the Chemical Sciences.