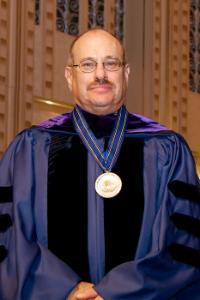 When Maxwell J. Mehlman joined the faculty of the Case Western Reserve University School of Law in 1984, the last science class he had taken was a high school biology course—a fact that stands true today, even as Mehlman is one of the most renowned experts on health law and bioethics.

After earning bachelor’s degrees from Reed College and Oxford University—which he attended as a Rhodes Scholar—and his law degree from Yale University, Mehlman moved to Washington, D.C., to practice at a firm, where he specialized in federal regulation of health care and medical technology. His passion was so great that, when he decided to enter academia, he sought out Case Western Reserve University School of Law. At the time, it was one of two schools specializing in the fledgling field of health law.

Mehlman joined the faculty in 1984 as an assistant professor. After he became associate director of the Law-Medicine Center in 1985 and then director in 1987, Mehlman was promoted to a full tenured professor in 1990. In 1996, he was named the Arthur E. Petersilge Chair, and reappointed to the position in 2006 and 2011. He also holds a secondary appointment in the Department of Bioethics at the medical school, where he does much interdisciplinary work on the ethical and legal issues related to genetics—a field he started studying in 1990 when the human genome project took off.

That year, Mehlman applied for, and won, a National Institutes of Health grant to study genetics’ ethical and legal ramifications. As a result, he began learning all he could about the topic.

Since then, he’s been almost continually funded by the NIH for research on multiple aspects of genetics law and ethics. Last year he earned the first NIH grant to study the ethical, legal and policy issues raised by the use of genomic science by the military.

“I’ve found I enjoy moving from topic to topic in a very broad field,” Mehlman said. “While you risk not being really profound on any particular issue, on the other hand it’s exciting—and it keeps me young, intellectually.”

Throughout his career, he has been a leading voice explaining and critiquing objections to pharmaceutical, biotechnological and genetic enhancements in humans.

In addition to numerous articles, Mehlman is the co-author, with Jeffrey Botkin, of Access to the Genome: The Challenge to Equality; co-editor, with Tom Murray, of the Encyclopedia of Ethical, Legal and Policy Issues in Biotechnology; and co-author, with Lori Andrews and Mark Rothstein, of Genetics: Ethics, Law and Policy, the first casebook on genetics and law, now in its third edition. He also is the author of Wondergenes: Genetic Enhancement and the Future of Society, published in 2003 (Indiana University Press); The Price of Perfection: Individualism and Society in the Era of Biomedical Enhancement, published in 2009 (Johns Hopkins University Press); and Transhumanist Dreams and Dystopian Nightmares: The Promise and Peril of Genetic Engineering, published in 2012 (Johns Hopkins University Press).

Mehlman holds memberships and/or fellowships in a number of important international organizations, including being the director of the Consortium on Emerging Technologies, Military Operations and National Security, a joint research project among universities around the country. He is a fellow of the Hastings Center, the leading bioethics institute; a recipient of the president’s award from the American College of Legal Medicine; and was a Stockdale Fellow in Ethics at the U.S. Naval Academy

“Max Mehlman is a giant in his field,” said Lawrence Mitchell, dean of the School of Law. “It is a privilege to serve as his colleague.”

At the law school, Mehlman has continually worked to improve programs. Under his direction, the health-law program consistently is ranked among the best in the country by U.S. News & World Report—in the most recent list, it is No. 5.

No awards or rankings, though, can compare to the satisfaction Mehlman feels when former students tell him of the impact he’s made on their lives.

“There’s a word in Yiddish for that, called ‘naches,’” he said. “It’s that good feeling you have when somebody you’ve taught makes you proud of them. It’s one of the best things you can experience.”