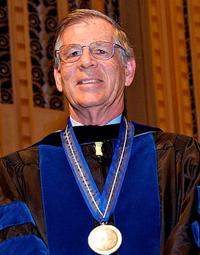 M.C. “Terry” Hokenstad, Ph.D., ACSW, holds the title of Distinguished University Professor at Case Western Reserve University. He is the Ralph S. and Dorothy P. Schmitt Professor at the Mandel School of Applied Social Sciences and serves as Professor of Global Health in the University’s School of Medicine.

Long active in international organizations, Dr. Hokenstad has served as a consultant to the United Nations and was a member of the United States Delegation to the U.N. World Assembly on Ageing in 2002. He has been president of the North American and Caribbean Region of the International Association of Schools of Social Work and has served as both treasurer and membership secretary of IASSW. At the national level, he has been president of the Council on Social Work Education, the national accrediting body for schools of social work, and chair of the International Committee for the National Association of Social Workers.

Dr. Hokenstad has served as a Fulbright research scholar at the Institute of Applied Social Research in Oslo, Norway, as a visiting scholar at the National Institute of Social Work in London, and as a senior Fulbright lecturer at Stockholm University in Sweden. He taught and carried out research as a Canterbury fellow at the University of Canterbury in New Zealand, and as an academic visitor at the London School of Economics. He has led delegations of social workers and social work educators to China, Cuba, Japan, Russia, and South Africa, and has lectured and led workshops in those countries, as well as in India, Australia, New Zealand, Chile, and throughout Europe. In addition, he has directed affiliation programs funded by the United States Information Agency with universities in Sweden and Hungary.

Global aging has been a special focus of Dr. Hokenstad’s career. He is a member of the Non-governmental Organization Committee on Aging at the United Nations, and in 2000, was appointed to serve on the UN Expert Committee responsible for drafting the International Plan of Action on Aging. In the 1990s, he headed a multidisciplinary training and technical assistance project for health care and social service professionals in 20 Central and Eastern European countries. The project funded by the Open Society Institute was designed to support the development of home and community care for older people in transitional societies. His cross-national research projects have examined innovations in elder care and pension policies in different countries.

Professor Hokenstad has had a career interest in educational program development. He was the initial director of a new School of Social Work at Western Michigan University, and then served as dean of the Mandel School of Applied Social Sciences for almost a decade. In these roles he facilitated the development of innovative masters and doctoral degree programs. Also, he has worked with government agencies and universities in Canada, Hungary, the Philippines, and Sweden, as well as the United States in the establishment and evaluation of Ph.D. programs in social policy and social welfare.

Born in Nebraska, Dr. Hokenstad earned his Bachelor’s degree, summa cum laude, at Augustana College in Sioux Falls, South Dakota, and his professional social work degree at Columbia University. He received his Ph.D. from  Brandeis University’s Florence Heller Graduate School for Advanced Studies in Social Welfare. He also holds a Certificate in Educational Management from Harvard University. He received the 2006 International Sarnat Award from the National Association of Social Workers and is recognized as a Social Work Pioneer by NASW. He has received the Significant Lifetime Achievement Award from the Council on Social Work Education, and in 2004, he received the IASSW Katherine Kendall Award for a “Lifetime of Distinguished International Service to Social Work Education.” In 2009, he was chosen as “Educator of the Year” by the Ohio Association of Gerontology and Education and as “Partner in Advancing Education for International Social Work” by the CSWE Global Commission. In 2012 he was inducted into the Ohio Senior Citizens Hall of Fame.