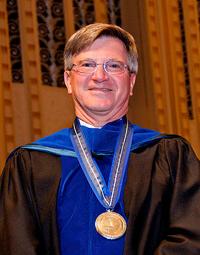 P. Hunter Peckham, PhD, Donnell Professor of Biomedical Engineering and Orthopaedics, is a celebrated scholar in the university community and known around the world for his research. Peckham focuses on the use of functional electrical stimulation to restore hand and arm control in paralyzed individuals. He was instrumental in the creation of the Cleveland Functional Electrical Stimulation (FES) Center, which studies the application of electrical currents to generate or suppress nerve activity. As the center's executive director, Peckham has built a model of successful research collaboration among scientists, engineers and clinicians from the Cleveland Veteran's Administration Medical Center, Case Western Reserve University and MetroHealth Medical Center. He is a member of the Department of Veterans Affairs National Research Advisory Council and the NIH National Institute of Bioimaging and Bioengineering National Advisory Council.

Peckham joined the CWRU faculty in 1972. He holds eight patents, has authored hundreds of articles and was elected to the prestigious National Academy of Engineering in 2002. Over his career he has been honored by his peers and dozens of organizations for his achievements, including:

Peckham's accomplishments have also been recognized in other areas at CWRU. He received the Frank and Dorothy Humel Hovorka Prize from CWRU in 2009. He is also frequently tapped by the university's administration to serve on high-level committees, including the presidential and provost search committees, the Provost's Commission on Research and Graduate Programs, the ACES (Academic Careers in Engineering and Science) Steering Committee, and served as interim chair of the biomedical engineering department.