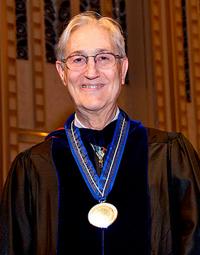 Robert C. Elston, PhD, is a celebrated scholar and educator, having earned a distinguished reputation during his 15 years at Case Western Reserve University and his accomplished career prior to joining the university.

Elston is currently the chair of the Department of Epidemiology and Biostatistics. During his career, Elston has mentored more than 40 graduate and 40 postdoctoral students in his tenured positions at CWRU, the University of North Carolina, Chapel Hill and the Louisiana State University Medical Center in New Orleans, at the last of which he initiated the creation of master's degree and doctoral programs in both biometry and human genetics.

He has published more than 600 scientific papers—two of which are among the most cited in the journals in which they appear.

Through the Human Genetic Analysis Resource—funded since 1987 by a grant from the National Institutes of Health's National Center for Research Resources—Elston developed the Statistical Analysis for Genetic Epidemiology (SAGE) computer software. This computer program package is used in the genetic analysis of family and pedigree data to better understand the link between family disease history and genetics. Elston has taught courses on the use of the software to more than 1,000 researchers around the world.

He holds active memberships in six professional organizations, including: the International Genetic Epidemiology Society, the American Society of Human Genetics and the Royal Statistical Society.

Elston joined CWRU in 1995 and now directs the Department of Epidemiology and Biostatistics' division of genetic and molecular epidemiology. In 2008, he was recognized for a teaching career that has spanned almost half a century with the American Society for Human Genetics (ASHG) Award for Excellence in Human Genetics Education. In addition to numerous individual awards for his research, he has served as a visiting professor and given guest lectures at several prestigious institutions.