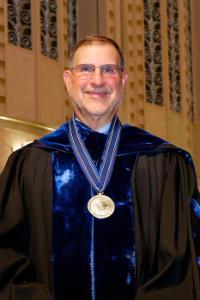 Robert F. Savinell, a native Clevelander, joined the faculty of Case Western Reserve faculty in 1986 as an associate professor of chemical engineering, and shortly after his interest in electrochemistry matured into a passion of his.

During Savinell’s graduate studies at the University of Pittsburg,  he was exposed to electrochemistry and the mentorship of Chung-Chiun Liu, now a Case Western Reserve University Distinguished University Professor.

Years later, Savinell, the George S. Dively Professor of Engineering and a professor of chemical engineering, is an internationally recognized scholar in the field of electrochemistry and a cornerstone for the Case Western Reserve electrochemical community. His achievements have earned him the university’s top honor for its faculty—Distinguished University Professor—a title he now shares with his longtime mentor.

Following completion of his graduate studies, Savinell worked for several years as a research scientist for the Diamond Shamrock Corporation and on the faculty of the University of Akron and further developed his interest in electrochemical fundamentals and technologies.

Savinell’s research addresses fundamental engineering and mechanistic issues of electrochemical systems/device design, development, and optimization.  He applies mathematical and experimental techniques to achieve an understanding of the interactions among kinetics, thermodynamics and transport processes at interfaces within electrochemical systems.  The technologies he has worked on include fuel cells, flow batteries, electrochemical capacitors, sensors, chemical synthesis and metal recovery, wastewater treatment, and high surface area electrode structures.  Savinell has been particularly active in developing and integrating new materials into electrochemical systems.   Savinell is a co-inventor of the first membrane capable of practical proton conductivity at temperatures above 100C at low relative humidity.  This ground-breaking work has provided the inspiration for a world-wide activity in developing high temperature polymer electrolytes for fuel cell and hydrogen pumping/purification applications. His recent work involves creating a flow battery primarily using iron and water—designed to improve the efficiency of the power grid and accelerate the addition of solar and wind power supplies.   Savinell’s published articles and patents are highly cited.  Even some of his early work on flow batteries, hydrogen-bromine rechargeable fuel cells, and shunt current modeling are now again receiving attention because of the intense interest in large scale energy storage for grid stability/robustness and renewable energy implementation. He is one of three editors-in-chief of the recently published (2014) Encyclopedia of Applied Electrochemistry by Springer.  Savinell has mentored over 25 PhD students, 35 master’s students, 30 postdocs/visiting scholars, and many undergraduate student researchers.

Savinell has been active teaching all levels of students at the university. He developed one of the earlier SAGES University seminars on fuel cells and energy, which he has taught multiple times. He now teaches a SAGES First Seminar and a SAGES University Seminar along with a graduate-level seminar course on electrochemical engineering.

Savinell has served in a number of leadership positions at the university including being the former director of the Yeager Center for Electrochemical Sciences, Associate Dean of Engineering, and Dean of Engineering.  During his time as dean of the Case School of Engineering from 2000 to 2007, Savinell increased research funding and spearheaded the undergraduate research program Support of Undergraduate Research and Creative Endeavors (SOURCE).  Savinell is on the advisory board of the Great Lakes Energy Institute and served as the elected Chair of the Faculty Senate during the 2014-2015 academic year.

In 2013 he was appointed Distinguished University Professor by the Board of Trustees of Case Western Reserve University.

“I am humbled to be selected to receive CWRU’s top faculty honor,” Savinell said. “I feel so fortunate that my interests in teaching, scholarship, and service have aligned so well with values of the university. This honor is the pinnacle of my career.”