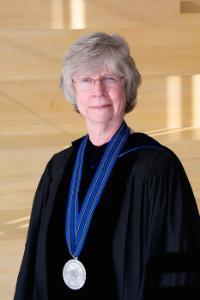 As a clinical child psychologist, Sandra Russ recognized a connection between creativity and pretend play. That link prompted questions: How is pretend play related to creativity? Could creativity be increased through pretend play experiences?

Digging for answers led Russ to develop “The Affect in Play Scale” to measure play in a standardized way—now considered a gold standard in the field of clinical psychology. She developed the scale to measure play in a standardized way by looking at imagination and expression of the experience of emotion in play, which had never been done in the field when she did it in the mid-1980s. Through such groundbreaking work, she has become one of the most recognized scholars in children’s pretend play.

“I am still investigating the area of emotion and creativity,” said Russ, the Louis D. Beaumont University Professor in the Department of Psychological Sciences. “That interest is really my first love. I never get tired of reading or thinking about it.”

The scale works by having a child complete a five-minute play task to code various dimensions of play. Since she first introduced the scale, Russ and her graduate students have performed various validity studies, which have not only validated the scale, but also taught the researchers more about the correlation of play with creativity, coping and wellbeing. Her graduate students have continued her work by developing targeted play interventions, focusing on specific issues, such as creativity.

“My excellent graduate students have been central to the development of all of this research,” Russ said.

Working with students has always been a priority for Russ, who earned a PhD in clinical psychology from the University of Pittsburgh. That’s what drew her to academia after five years in a clinical setting.

“As a young person, I wanted to put a brick in the edifice of knowledge,” she said. “I still do. I think a university setting is the best place to have a chance to develop ideas. And working with a community of scholars in different areas always appealed to me, too.”

Russ has had the opportunity to meet faculty members from across the university through her service in multiple committees and organizations, most notably through her dedication to Faculty Senate. She served as chair of the senate twice, from 1984 to 1985 and 2013 to 2014. She has brought major advances in child development and psychotherapy to CWRU in her nearly 40 years at the university. In her time at the university, she has served as assistant provost from 1987 to 1991, associate provost from 1991 to 1994 and interim dean of the College of Arts and Sciences from 2003 to 2004.

“I enjoy working with faculty from different disciplines. And I enjoy working with policy and procedural issues that will have an impact on faculty and the functioning of the university,” she said. “I like to ‘fix’ things when I see problems and think of ways to improve things.”

The impact Russ has had on the campus community extends far greater than even her influence on her graduate students and Faculty Senate. As assistant and associate provost in the late 1980s and early 1990s, she implemented and monitored the university’s affirmative action policies—specifically, working to increase the number of women and minority faculty members.

Russ also oversaw the Minority Scholars Program, which was designed to recruit and retain under-represented minority undergraduate students, and helped lay the foundation for the University Center for Innovation in Teaching and Education (UCITE) as principal director of the Lilly Teaching Fellows Program for junior faculty members.

The five faculty members chosen for the program each year attended conferences and discussed the effectiveness of new teaching methods. They also pushed for a teaching center on campus, a vision that resulted in the establishment of UCITE in 1994.

Now, with the appointment of Distinguished University Professor, Russ will continue to add more rewarding experiences to her career.

“It is hard to convey what deep satisfaction I take from receiving this appointment and this recognition from the university,” Russ said.