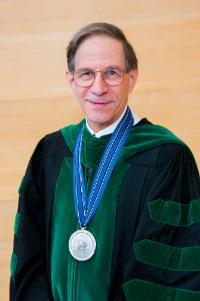 Dr. Sanford (Sandy) Markowitz is the Sanford D. Markowitz / Frances Wragg Ingalls Professor of Cancer Genetics in the Department of Medicine at the Case School of Medicine, and a medical oncologist and cancer researcher, who is nationally recognized for his contributions in cancer genetics, personalized medicine, and cancer biology.

Major discoveries from the Markowitz laboratory include: i) Discovery of mutations in TGF-ß RII receptors in human cancers.  This discovery identified TGF-ß RII as a tumor suppressor gene and further identified TGF-ß signaling as a core tumor suppressor pathway.  Mutations in TGF-ß RII and in other TGF-ß signaling elements are now recognized as key drivers present in the great majority of human colon and pancreas cancers; ii) Providing, via TGF-ß RII, the first specific explanation of the structural vulnerabiity that creates unstable genes and drives tumorigenesis in patients with hereditary colon cancer (Lynch syndrome); i.e. mutations in TGB-RII explain how and why colon cancers develop in Lynch syndrome; iii) Discovery of 15-PGDH as a tumor suppressor gene and as a regulator of tissue stem cell's response to organ injury; iv) Invention of the first in vivo active 15-PGDH inhibitor drugs and demonstration of their potential use for tissue regeneration; v) Discovery of the molecular basis for resistance to the colon cancer preventive effects of aspirin; vi) Discovery of DNA methylation and epigenetic silencing of two genes, hMLH1 and CDH1, that are key driver genes in human colon and gastric cancers; vii) Discovery of vimentin gene methylation as a sensitive and specific biomarker of colon and esophageal cancers.  The Markowitz lab was also a key member of the teams that viii) demonstrated P53 is a colon cancer suppressor gene – with P53 now recognized as the most common suppressor gene inactivated in human cancer; ix) discovered inherited mutations in DNA mismatch repair genes as a cause familial colon cancers; x) discovered mutations that activate the PIK3CA oncogene in cancer – with PIK3CA now recognized as the most common oncogene activated in human cancers; and xi) sequenced the first cancer genome – the colon cancer genome.

Discoveries from the Markowitz laboratory have been instrumental for the development of a molecular test (of hMLH1 methylation) that is in clinical use for distinguishing sporadic from hereditary colon cancers; development of an FDA approved stool DNA test for early colon cancer detection; initiation of human clinical trials  for biomarker based early detection of esophageal cancers and pre-cancers; and initiation of an NCI program for clinical development of 15-PGDH inhibitors for potentiating hematopoietic recovery following bone marrow transplantion.

At Case Dr. Markowitz serves as Co-Leader of the Cancer Genetics Program of the Case Comprehensive Cancer Center and as Principal Investigator of the NCI established Case Specialized Program of Research Excellence in Gastrointestinal Cancers (GI SPORE).

Nationally, Dr. Markowitz has served on numerous advisory boards, including: the National Cancer Institute Board of Scientific Counselors; the Scientific Advisory Board of the National Colon Cancer Research Alliance founded by Ms. Katie Couric; and External Advisory Boards of the Human Oncology and Pathogenesis Program at the Memorial Sloan Kettering Cancer Center, the Abramson Family Cancer Research Institute at the University of Pennsylvania, and the Dana-Farber/Harvard Comprehensive Cancer Center.

Dr. Markowitz’s recognitions include election to the American Society of Clinical Investigation, election to the Association of American Physicians, and serving a 12 year term as an investigator of the Howard Hughes Medical Institute.  He is a recipient of the Ohio State University Human Cancer Genetics Program Commemorative Medal, the University of Pittsburgh Sadie Gerson Distinguished Scholar Award, the Case Western Reserve University Distinguished Research Award, and the Mount Sinai Healthcare Foundation Maurice Saltzman award, and has served as Petros Palandjian visiting professor at the Dana Farber Cancer Center, Baldini visiting professor at the Beth Isreal Deaconess Medical Center, and Scott Wadler visiting professor at the Cornell Weill School of Medicine.

Dr. Markowitz pays particular credit to working at a wonderful institution with terrific and collaborative colleagues and with extraordinary trainees.  He notes that, ““The people who work with you and who you train become a family in many ways.  I take tremendous pride and great pleasure in the many successes that our lab’s alumni have accomplished in their own right.”