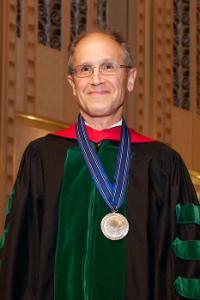 In 1983, professor Nathan Berger hired Stanton Gerson, fresh out of his fellowship at University of Pennsylvania, to join the Case Western Reserve University School of Medicine Division of Hematology Oncology. The next year, when Gerson’s interest turned to gene therapy, he formed a research partnership with professor Richard Hanson. Berger went on to become the school’s dean from 1995 to 2002, and Hanson is internationally renowned for his brilliance in genetic research.

“In my early career, I just happened upon smart and capable people who certainly helped me get where I am today,” Gerson said.

Berger and Hanson also went on to become Distinguished University Professors, and Gerson joined their ranks when he is awarded the permanent, honorific title.

“It is incredible recognition—and it’s also a responsibility because Distinguished University Professors, especially given the lineage I follow, represent some very high-quality individuals who have made major accomplishments to the university over many years and decades,” Gerson said. “It’s a huge honor to follow in the footsteps of such accomplished investigators, inventors, leaders and teachers for this university.”

Gerson himself has always been an investigator. As a child in Lincoln, Massachusetts, he performed science experiments in his basement with his siblings and father, a physicist.

He earned his undergraduate degree in biochemistry at Harvard College, his medical degree at Harvard Medical School and completed a residency and fellowship at the Hospital of the University of Pennsylvania. After multiple distinguished publications in hematopoietic stem cell biology, chemotherapy and infections related to leukemia treatment, Gerson was the first recruit for the Division of Hematology Oncology, which is now part of the Case Comprehensive Cancer Center.

His early research led to a collaboration with biology professor Arnold Caplan. Together, they produced publications and patents related to mesenchymal stem cells and then oversaw four first clinical trials using these cells. Their work was the foundation of what is now the National Center for Regenerative Medicine, a center within the medical school led by Gerson that has more active clinical trials than any stem cell center in the country.

In 1992, he became the program leader for the Stem Cell Biology Program of the Case Western Reserve University Cancer Center, a position he held until 2004 when he was appointed director of the newly reorganized Case Comprehensive Cancer Center, which involves CWRU, University Hospitals and Cleveland Clinic. After Gerson applied to renew the center’s funding last year, the National Cancer Institute renewed its grant for five years and scored the program “outstanding,” placing it among the top six to eight cancer centers in the country. The center counts more than 350 faculty members among its ranks, including those from nearly all schools and colleges at CWRU.

Gerson is known throughout the university for his ability to build successful teams and make collaborations work—like he did with the cancer and stem cell centers. And although he’s been the key in turning so many successful ideas into realities, he insists it’s not solely because of his leadership.

“I’m not bashful at all about the accomplishments, but they’re not mine,” Gerson said. “They’re because of the astonishingly capable individuals and groups involved.”

In addition to leading the centers, Gerson is the Asa and Patricia Shiverick–Jane Shiverick (Tripp) Professor of Hematological Oncology and director of the Seidman Cancer Center at University Hospitals Case Medical Center. Though his administrative roles require a significant amount of his time, Gerson still is an active, prominent researcher. He has earned multiple National Institutes of Health (NIH) grants and published more than 220 journal articles, 260 abstracts and 29 book chapters. Gerson is co-editor of the textbook Cancer Gene Therapy—now in its third edition—and Clinical Hematology, published in 2005. His research has led to 16 patents in gene therapy and cancer drug development, which have been licensed to three companies.

Gerson’s career success has led to prominent recognition. He is a member of the American Association of Physicians, a board member of the American Association of Cancer Institutes and member and chair of numerous NIH study sections. He’s received the Mallinckrodt Scholar award, the 2012 Case Western Reserve University Medal for Excellence in Health Science Innovation and the Honorary Alumnus of the Year Award from the CWRU Medical Alumni Association, among many other honors.

“Stan is an accomplished scientist in his own right and a true scientific leader,” said Pamela B. Davis, dean of the School of Medicine and vice president for medical affairs. “His collaborative spirit has infused the Case Comprehensive Cancer Center with a sense of shared purpose and the energy to drive toward cures. His imagination and vigor have allowed the university to establish the National Center for Regenerative Medicine as a collaboration among our hospital partners, industry and, now, distant universities as well. He is a remarkably talented and capable individual, and we are proud to have him at CWRU.”