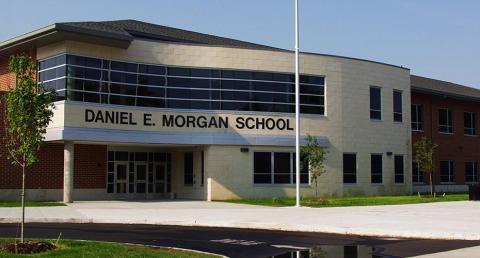 Dessie Sanders was the principal at Cleveland Metropolitan School District’s Michael R. White Elementary School when she was first introduced to a program that would bring Case Western Reserve University students into her building to work as tutors.

The program yielded positive academic and social emotional results in her students and she renewed it through each of her 11 years as the school’s principal.

So eight years ago, when Sanders became principal of Daniel E. Morgan School, a PreK-8 school with 280 students in the Hough neighborhood, she insisted that the program would move with her.

“Even though the [Case Western Reserve] students aren’t education majors, they are so good with the kids. They are truly engaged with our scholars. In fact, many of our scholars are better behaved for them than they are for our teachers,” Sanders says with a laugh.

For the fall 2022 semester, four Case Western Reserve undergraduate students traveled to Daniel E. Morgan twice a week, tutoring approximately 20 students. The needs of the students vary—some require remediation and others who are working above grade level receive enrichment.

Sanders says that the tutors were especially helpful during the pandemic lockdowns when her students transitioned to full online learning. “The tutors helped us to continue educating our scholars, despite the situation they were in. That made a difference,” she says.

Last year, student achievement data showed that the students in grades 4-8 either made growth as expected or more than expected across math, science, and English language arts on Ohio’s State Tests. Sanders attributes this, in part, to the time her scholars spent with Case Western Reserve tutors.

Although Sanders says that her primary goal for scholars is improved academic achievement, she says that she consistently sees gains in her scholars’ motivation and outlook because the Case Western Reserve students serve as role models and mentors.

“It’s valuable when our scholars can talk to Case students who can say they wanted to be engineers, or doctors when they were an elementary school student, and then to be able to show our scholars they are working toward their goal,” Sanders says. “Just giving our scholars the opportunity to ask Case students questions like, ‘What’s the process of going to college,’ or ‘How did you decide where to go to college,’ is an exposure Daniel E. Morgan student may not otherwise have and that might make a difference.”