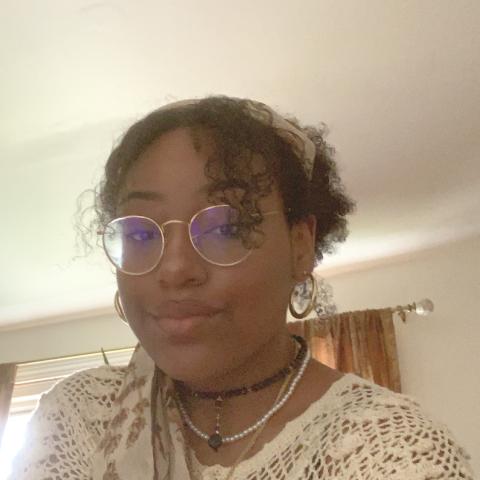 Alana Johns is a second-year student who has made it a point to be an engaged member of the Case Western Reserve campus community. The religious studies and political science double major also is the incoming co-president of Feminine Empowerment in Media, Art and Literature and they are the fundraising chair for UNICEF. And last summer, Alana earned a Humanities@Work fellowship from Post Graduate Planning and Experiential Education to fund their internship at a local creative services agency, where they gained valuable experience that will help inform their future career. Read more about Alana Johns.

Tell us about yourself and what brought you to Case Western Reserve.

I grew up on the west side of Cleveland and went to the Douglas MacArthur Girls Leadership Academy for elementary and middle school. Then I went to Bard High School Early College Cleveland, where I earned my associates’ degree in liberal arts. Because I was applying to college during the first year of the pandemic and given the political unrest in the country at the time, my family and I decided that it would be better for me to stay closer to home. So that’s what I did.

You’re the current Vice President and soon-to-be co-president of Feminine Empowerment in Media, Art, and Literature. You’re also the fundraising chair for UNICEF. Clearly, being an engaged member of the campus community is important to you.

Yes it is. But my first year was an adjustment for me because I came from a high school where I was really involved and active. There was also an adjustment because of the population difference here, the opportunities and the competitive aspects. I spent a lot of time last year rebuilding myself so that I could have the background, the knowledge and the experience to get back to doing the significant work that I wanted to be doing. For example, I knew that I wanted to be a part of UNICEF and so I ran for multiple positions, but I didn’t get them until later in the year. And now I’m part of the UNICEF executive committee. That was something I really had to fight for, but it was an experience and opportunity that I really value. I know what I want to do, it’s just about getting the clout to do them.

My goal since joining FEMAL has been to ensure that we are creating opportunities for all CWRU students to become educated on women's issues. As a black queer non-binary individual, I also advocate for our embracing intersectional feminism and bringing in voices from all backgrounds. The club as a whole is about education, fundraising, and advocacy. I would say that my passion lies in education.

You originally planned to study medical anthropology, but now you’ve turned your sites on political science and religious studies. What led you to change majors?

I took a religious studies class last year with Professor Deepak Sarma and I absolutely loved the class. That is where my passion for religious studies blossomed. Political science and bioethics are my passion in terms of career. I believe that I can have the greatest impact on within public health at the policy level.

This past summer, you had an internship with Rhonda Crowder and Associates, helping her to coordinate interviews for Ideastream’s Connecting the Dots project, which explores how race contributes to poor health outcomes in Cleveland. How did that experience shape any plans for your future?

There were two interviews that I did for the project that really helped me to know that public health is a field that I want to pursue. First, I interviewed a woman who worked in a public health department. She believed that some Black youth would become violent after late-night basketball games because they were hungry and tired. So she started a program to distribute food to Black youth at late-night basketball games with the goal to reduce crime. It was such an obvious solution and it worked. It helped me to realize that there are probably so many other issues like that with good solutions, if you just look closely enough at what people are doing and what their needs really are. I also interviewed someone who was pre-law and worked in law and with nonprofit health organizations. They shared that their experience helped them to narrow down whether they wanted to do public policy or public administration. I’d always thought that if you got a law degree, you were good for policy and administration and now I understand that I have an abundance of options after I graduate—go to law school, get a master’s in public health, public policy, or in public administration.

Given your interests and your major, where do you see yourself post-graduation? What would be your ideal career?

Even though I’ve shifted my majors to religious studies and political science, my interests actually haven’t shifted that much. I know that I would like to go into public health. Since coming to college, I’ve been interested in environmental health, and especially as it relates to children’s health. I’d like to pursue that at the policy level.