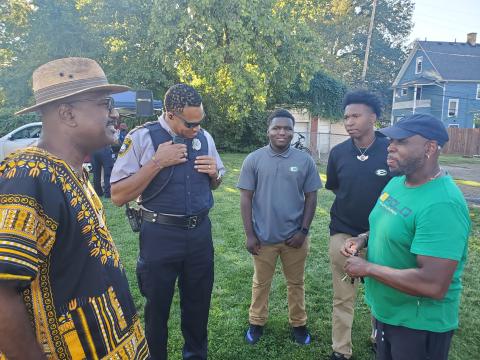 When Cleveland City Council approved an ordinance this past May to allow the Case Western Reserve University Police Department to expand its jurisdiction into Little Italy and further into the Glenville neighborhood on the north side of campus, CWRU Chief of Police Paul Owens wanted to create an opportunity for the residents, students and police to mingle.

So he did the neighborly thing and invited everyone to a "Cookout with the Cops" event after students returned to campus on August 31.

“We wanted to give neighbors the chance to meet with students so that they would know this isn’t a typical college party town. And we wanted the students to know their neighbors because this is a residential community and we want to treat it with respect,” Owens says. “It was also important for everyone to see our officers out and about and engaging with both groups. We wanted to be available to answer any questions that anyone had about us or about the expanded jurisdiction.”

Owens said that the event was well attended by neighbors, students and police and inspired two additional events. On October 27 from 5-7 p.m., the police department plans to host a Halloween "Trunk or Treat" event at the Music Settlement Parking Lot (1585-1623 Mistletoe Dr.) to pass out candy to neighborhood children. And this holiday season, the department plans to continue its Shop with a Cop program to provide gifts for families in need.

“Really, anything that helps all of us develop a better relationship with one another is good for the community,” Owens says. “It’s about getting to know each other and understanding one another. We know that there are some relationships that have been damaged because people have had bad experiences with police. But we want to repair those relationships and rebuild trust.”