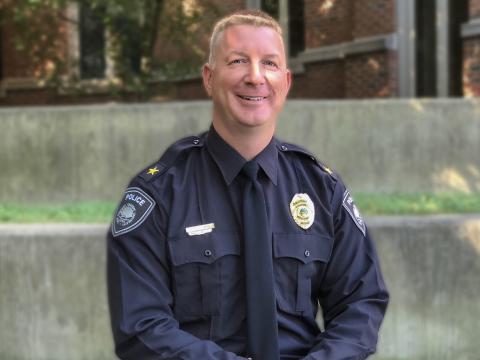 Case Western Reserve University Chief of Police Paul Owens was sworn in earlier this month after serving as Interim Chief since March 2022. Owens says he is honored to serve in the position after spending nearly his entire career at Case Western Reserve. Owens joined the university in 2004 as a security guard and then, when the university formed its police department in 2006, he attended the police academy and became an officer. He also was a recipient of the 2021 President’s Award for Distinguished Service, which honors staff members whose outstanding contributions to our campus culture have a transformational effect. Read more about Chief Owens, his priorities for campus safety, and his desire to ensure that our university police and surrounding communities enjoy a close, collaborative relationship.

As Chief of Police, what are your top priorities for campus safety?

Owens: Our top priority is to make sure that faculty, staff and students feel safe on campus. And I also want our neighbors to feel and know that our police department is a part of their community. We are here to help, to collaborate and to engage in a way that’s community focused.

What’s the leading bit of advice that you would give to students when it comes to safety?

Owens: My advice to students is to take care of each other and to look out for each other. If a friend is in a bad situation, help them to get out of that situation, and don’t be afraid to ask for help from the police. That’s why we’re here. I’d also encourage students to take advantage of all the resources we offer, whether that’s Safe Ride, SpartanSafe, ALICE training or any other safety resource. Knowing how to use the safety tools we have and how to stay safe is a part of every student’s overall health and wellness.

Some of your officers are teaching a physical education class this fall. Tell us more about that.

Owens: This year, some of our officers are also professors, which is pretty cool. They’re teaching a self defense class through the department of physical education. We had a lot of requests for the class, and this fall, we were able to do it. The class focuses on how to be aware of your surroundings and how to perform various types of defense techniques. We have two classes that are full and we’re going to teach two more in the spring. It’s been a successful program and the students are enjoying it.

You’ve worked your way up through the Police Department. Was being a police chief something that you’d always wanted to do?

Owens: It was certainly a goal of mine once I became a police officer here. But when I was in college, criminal justice was my third major. At first, I thought I wanted to study business, but I learned pretty quickly that I didn’t have an interest in that. Then, I thought maybe I’d want to go into teaching and coaching because I love sports. But then my sister’s boyfriend was studying criminal justice and it sounded interesting. So, I decided to enroll in a few criminal justice classes and I found that I really liked them. I especially liked that I could be out helping people and interacting with them. It was a job that I could see myself doing. And I was able to be a coach after all—I’ve coached my daughter’s and son’s basketball teams. I’ve also coached my son’s football and baseball teams, so that’s been fun.

There’s been a real shift in recent years for police officers to be more present and engaged in the community in positive ways, rather than just being seen as enforcement officers. How have you embraced that philosophy?

Owens: We’ve prioritized putting ourselves out in the community so that faculty, staff, students and our neighbors just get to know us as people. What we’d rather not have is that your first interaction with us is when you’re in a bad or stressful situation. So, whenever there are campus events, we always appreciate being invited and included so that we can build those connections. Our goal is for people to look at our department, our officers, our dispatchers and our security guards and know that they are community oriented.