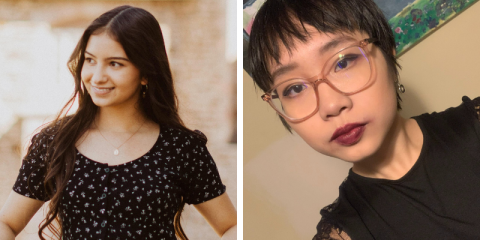 Despite a 2021 report from the Institute for Democracy and Higher Education that found voter turnout among college students was a record high 66-percent in the 2020 presidential election, Case Western Reserve undergraduates Sabrina Wicker (left) and Phuong Nguyen (right) say this is hardly the time to leave well enough alone. As the university’s two Democracy Fellows, Wicker, a second-year student, and Nguyen, a third-year biochemistry major, are passionate about motivating their peers to vote, to engage in our democracy and to have their voices heard. Read more about Wicker and Nguyen and their work to promote voter registration and education.

How and why did you become interested in this type of advocacy?

Nguyen: I’m originally from Vietnam and my family moved to Maryland when I was in the ninth grade. Personally, I’m not eligible to vote because I’m not yet a naturalized citizen, but as an immigrant, I believe that this right to vote here in the United States is something so precious to the citizens of this country. It’s what makes our model of democracy work. And on college campuses, we already know that students aren’t voting fully to their potential. So, here at Case Western Reserve, I want to be a part of the work to maximize the number of college students who do vote.

Wicker: When I was in high school during the 2020 election, I was still 16, so I couldn’t vote, but I wanted to find ways that I could engage. I became a student election judge in my home county of Arapahoe County, Colorado. That was a really cool experience because you could see what the voting process was like from the standpoint of administering ballots, checking voters in and verifying voter signatures. When I came to campus in the fall of 2021, I learned about the Campus Voter Project and I applied to be a Democracy Fellow.

College students have a lot of competing interests—school, jobs, activities, social life—how do you convince your peers that voting is something they should prioritize?

Wicker: That’s the golden question. We ask that every day. But my approach is to tell people that this is the way that you can use your voice. This is how you can be heard. It’s a common myth that voting, especially as a student, doesn’t matter. For example, for those of us who voted in the November 2021 election here in Cleveland, we directly voted on Issue 24, which is intended to restructure how crime and policing are handled in the community. It proposed a local change that may greatly impact the greater Cleveland community.

In our work as Democracy Fellows, we also try to make it as easy as possible for college students to register or to learn more about how they can vote. We always say that the fewer steps that someone has to take on their own to vote, the more likely they are to do it. There are so many barriers to voting for college students—voting laws vary from state to state, so students who want to vote in their home states can find the process complicated.

Nguyen: The way I approach it with my friends is a little different than how I would approach it with other students. But I think that generally speaking, people should think about voting in terms of the social issues that impact them and that by voting, they have the ability to change either the policies or the laws that apply to those issues. We’re also working on engaging professors in encouraging students to vote. Students spend a lot of time in their classes and they respect their professors, so if professors get their students excited about voting, then students are more likely to look into it.

Do your post-undergraduate plans include continuing this type of advocacy?

Nguyen: I am definitely interested in continuing this work in the future. And for now, the advocacy work I’m doing is actually helpful for me if I pursue a career in scientific research. There’s a lot of collaboration, teamwork and planning involved in getting people out to vote. And these same skills are valuable in scientific fields.

Wicker: This advocacy has solidified my interest in doing work that involves social justice and activism. I’d also like to approach this from a research perspective and really take more of an empirical approach to social reforms. I think there’s a way to be an academic and an activist.

Your work as a Democracy Fellow is nonpartisan. Why is that aspect important to you?

Nguyen: The fact that it’s nonpartisan was a really important reason why I wanted to do this work. Being nonpartisan gives me a lot of room to just encourage people to vote. If you’re working in voter engagement, it’s only fair if you’re working to put out the voice for both sides.

Wicker: Sometimes, students feel like there’s nothing on the ballot for them. But I tell them that there is always going to be something on the ballot that affects you, your friends or someone you care about. And some of those issues are serious. Regardless of what side you’re on, I always promise people that there’s something on that ballot for you. We are a democracy—it’s always best to err on the side of staying involved and advocating for what you think is right.