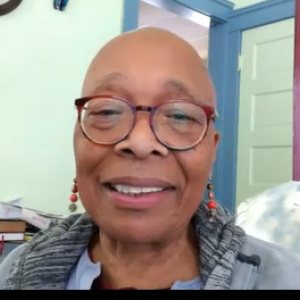 Rita Knight-Gray has been a Glenville resident for 65 years and is a member of the Case Western Reserve Neighborhood Advisory Council. "My neighborhood has been stagnant and without hope for almost 60 years, so I completed the Foundations of Community Building course, which later led to being a member of the Neighborhood Advisory Council. I began to believe I had found a way to assist with returning hope and rebuilding my neighborhood."

Knight-Gray holds a B.S in Communications (Radio/Television, Theatre) and a Masters of Library Science (area of concentration Archiving Preservation), both from from Kent State University. A product of the Cleveland public schools, she graduated from John Hay High School in 1967 on a Friday in June and started working as a Bookkeeper on Monday. After her graduation from Kent State, she volunteered in production and lighting at Karamu Theater.

In 1979, she took the train to Los Angeles via San Diego. She found that the west coast was different than the east coast and a car was needed. Instead of returning home, she stayed with a friend in San Antonio, where she was hired as a camera operator and production technician at a local television station. She loved the job, but she wanted to have a lighting career in film. So she returned to Cleveland, purchased a car and returned to Los Angeles.

Rita’s goal was to become a female best boy in the movie industry within five years. She worked as a library assistant at the University of Southern California full time while working part time as a lighting assistant for various independent lighting production companies. Near the end of her five-year stay, she was hired to work at 20th Century Motion Pictures. Unfortunately, the actors went on strike—knowing it would take another five-plus years to be hired, she returned to Cleveland.

Working at the law library, she decided in 1998 to return to Kent State to work toward a Master of Library Science degree, which she earned in 2003. She subsequently earned an Audiovisual Archiving Graduate Certificate online from Charles Strut University in Australia.

She has a certificate for completing the Foundations for Community Building program from the Jack, Joseph and Morton Mandel School of Applied Social Sciences. She worked with the Center for Community Health Integration at the School of Medicine and Health Improvement Partnership-Cuyahoga, assisting with creating the CSII GMB Model regarding health structural racism.

She is a writer, documentary maker and researcher. You can watch some of her films on her YouTube Channel, History - Knight-Gray Sankofa Remember.