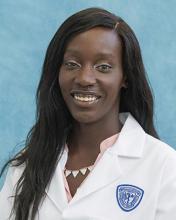 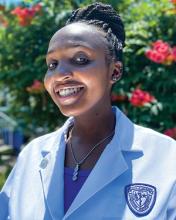 Third-year medical students Rebekah Russell (pictured left) and Megan Sharpe (pictured right) both have a passion for serving the community, and in doing so, improving the lives of those they serve. In July 2022, they collaborated to plan and execute a community health fair that drew in more than 130 community members. The event was done in partnership with Case Western Reserve and East Mount Zion Baptist Church. Read more about Rebekah and Megan.

Where are each of you from and have you always been engaged in community work?

Megan: I’m from a small town in the top of the boot of Louisiana. I went to middle school in Atlanta, high school in Louisiana and college in St. Louis. So, I’ve been in areas that have felt similar to Cleveland in that the population is a majority Black, segregated and there are many people living in poverty. And each of these cities also has huge hospital systems that tend to be located next to populations that probably need health care the most. As I moved through secondary education, I realized that people get into this bubble where they think that they don’t have time to volunteer, but it was important to me to make connections here. I don’t ever way to live my life where I’m not a part of the community that I’m supposed to be serving.

Rebekah: I grew up two miles from Case Western Reserve University in East Cleveland. In fact, I remember the apartment building that stood where the HEC stands today. So I live with those types of memories of the neighborhood and the community and I’ve seen it change for the better, and sometimes, for the worse. And those memories keep me going to be civically engaged. In terms of service, the church I grew up in would feed people in the neighborhood. Then, I went to a Catholic school and I would go to the Cleveland Food Bank on Saturdays with my mom to help. And then in high school, I was volunteering at Judson Manor. So, I’ve always been around service and it’s just been something that’s been important to me.

How did this idea for a community health fair come up?

Rebekah: Megan and I are friends and about a year ago, she reached out to me with her idea for a health fair that was focused on kidney and urological health. She knew I was from Cleveland, so we started working together as a team and started contacting people. We reached out to East Mount Zion and they were enthusiastic about doing it. Our role was to bridge the relationship between Case Western Reserve and East Mount Zion. We expanded beyond kidney and urological health and made it a broader focus to include general health screenings. In the end, we had visitors of all ages come.

Megan: It was a good experience. I was lucky to have a few mentors who encouraged me when I initially shared my idea with them. And I’m really glad that we partnered with East Mount Zion so early. Just having a community partner helped make it a success. I think that we did a good job of recruiting community partners who could help us make our offerings as comprehensive as possible.

What were the lessons learned from your experience organizing the community health fair?

Rebekah: We’d love to do this again next year because we both have a year left. One of the biggest things we’d like to do next time is to get more support on our marketing. We’d like to reach more people. We were so pleased that most of our partners showed up and that some of the folks we’d reached out to directly through door-to-door marketing showed up. For the first time doing this, we had a good turnout.

Megan: I think we’d like to recruit a little earlier and maybe a bit more broadly next year. I would just love to make it bigger and better each year.

What are your plans after medical school?

Megan: I know that I’m interested more in surgery than medicine. I want to do something more with my hands because I like being in the operating room. But I think that this experience has shifted how I want to practice medicine. Initially, I was hesitant to jump into surgery because it’s a field that’s not known for advocacy. Advocacy is something that many people tend to associate more with family medicine. And I was worried that I wouldn’t be able to do the things that I’m passionate about if I went into surgery. I wanted to be able to help my neighbor and work with amazing surgeons who utilize cutting edge technology. But I’ve learned from my mentors that I can do both of those things. Now I know that the more successful you are, the more you know, the more you can do to help the people who need it the most.

Rebekah: I don’t know specifically what I want to do, but I’m thinking about OB/GYN or urology in terms of a specialty. I also have a master’s in public health from Case Western Reserve—and I got that because I wanted to combine my interest in community engagement and population health with healthcare and medicine. So my attention is really focused on wanting to practice medicine and wanting to have an impact on my community, wherever I am. But Cleveland is home to me, so ideally, I would love to be here and supporting my community through healthcare and related initiatives.