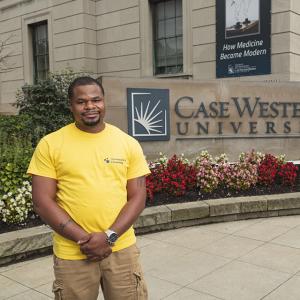 For James Barnes, running his own business was never a question.

After graduating from Whitney M. Young Leadership Academy in 2008, he founded Immaculate Cleaning Co. in 2011, a janitorial business servicing the Greater Cleveland area.

“In the early days, the company was just me,” said Barnes, a native of the Cleveland neighborhood of Hough. “I spent a lot of time networking and attending events as I honed my business model.”

It was through one of these events that Barnes connected with Tom Bassett, assistant director of strategic sourcing at Case Western Reserve. Bassett encouraged Barnes to submit a proposal to service several buildings on campus, resulting in Barnes’ first contract with the university in 2014.

Bassett’s request for proposals exemplifies the work of the university’s Supplier Diversity
Initiative Council, a group formed in 2002 to assist minority- and women-owned enterprises in gaining greater access to business opportunities at the university. The council does this by identifying and acting on ways to overcome barriers to doing business at CWRU and increasing diversity spending.

Since 2014, Immaculate Cleaning Co. has signed three more contracts on campus, most recently adding the Allen Memorial Medical Library in the summer of 2019.

“Working with Case Western Reserve really let us get our foot in the door of high-profile commercial services,” said Barnes, whose company has grown to include 10 full-time employees and numerous part-
time staff. “When I sit down with prospective partners and mention our work here, their eyes light up.”