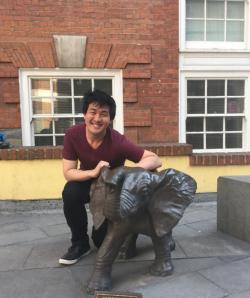 Julian Morimoto graduated from CWRU in 2018 and went on to law school at Harvard University - an achievement and endeavor he feels his year at the London School of Economics and Political Science prepared him for. While at CWRU, Julian majored in Mathematics. Read more about how Julian’s year in London shaped his Global Perspective, here:

What made you want to study abroad in the United Kingdom (UK) and at the London School of Economics and Political Science (LSE)?

I studied abroad through the LSE’s General Course Programme (GC), about which I knew since high school. Once I learned that Case Western Reserve University (CWRU) participated in this very program, I set my sights straight toward the LSE. Its reputation, law faculty, and location are unparalleled.

The answer to both of these questions is quite simple: the people. Being abroad made it quite difficult to keep in touch with my friends and family in Honolulu, especially because of the time difference. Moreover, I had transferred to CWRU at the start of my sophomore year, and to have to leave for another country for another year just when I was getting used to the campus was not an easy decision to make. Nonetheless, I found an immense support system through GC. Being one of the largest study-abroad programs in place, GC helped me connect with people from all over the US and the world. It helped me make lifelong friends and allayed my homesickness.

At the same time, a single year is a very short. I think about the friends I made abroad quite often, and do wish for us to be a lot closer geographically. Nonetheless, the friendships I made at LSE transcend distance. One of my GC pals will be attending Harvard University with me for graduate study this fall, and another one let me use her place in New York City this past weekend for a scholarship interview over the phone. Although I immensely miss the people I met at LSE, I know that they are always a phone call away, and they will always be there for me.

Name on thing about studying in the UK that you heard about before studying abroad and were surprised it was actually true.

I heard that the UK educational culture places more emphasis on academics than extracurricular activities. To a large extent, I found that this was true. Many of my peers spent considerably less time on their affairs outside of the classroom than their USA counterparts. This aspect of UK culture, however, meshed well with my personality. While I was not entirely wanting in leisure (I did ballet for 6-8 hours a week, and also made extensive use of London’s spectacular nightlife), I very much enjoyed immersing myself in my books and fully absorbing my academic materials.

What is something that you found shocking when you first arrived in the UK/at the LSE?

I was greatly taken aback by how international the city was. Prior to studying abroad, I pictured London as a rather quaint area characterized by strictly British mannerisms and establishments. Nothing could have been further from the truth. On my typical walk to class, I would hear voices from Japan, India, France, and West Africa. London is far from the timid British enclave I made it out to be: it is an exciting city of truly global character.

What are some similarities and differences between life in the US and the UK?

The biggest similarity between the two countries is that they are both English-speaking and Western places. This made completing daily tasks a lot less cumbersome.
In my experience, there was a greater respect for “order” that pervaded UK culture compared to US culture. I felt that social conventions and manners were taken a lot more seriously in the UK than in the US.

In line with the aforementioned similarity, classes at both the LSE and CWRU are taught in English. This makes it much easier to put the “study” in “study abroad”.
One major difference between academic life in the US and the UK is that your grades are almost entirely determined by a single exam. I truly enjoyed this, because I like maintaining a great degree of autonomy when it comes to my schoolwork. It was also excellent preparation for law school, where practically everything is exam based.

Of the many things I gained from my time abroad, perhaps the one I treasure most, is my newfound reverence for tradition. Prior to my time abroad, I believed that tradition and experience were poor considerations for policy decisions. In line with a US (and perhaps French) mindset, I instead thought that social change should be motivated by revolutionary sentiment and abstract reasoning. My abroad experience exposed me to a completely different way of thinking. Studying public law in the UK allowed me to both learn about how a respect for longevity and order pervade the UK’s constitutional arrangements, as well as witness how these attitudes are embodied by everyday UK citizens. This taught me to appreciate the good that a respect for tradition and experience can do. While it might take longer for “progressive” legal phenomena to gain traction in the UK system (where change is largely achieved through piecemeal, common-law reform instead of dramatic constitutional amendment), legal structures that promote social justice are much harder to overturn once they are in place. Studying abroad thus impressed upon me an admiration for tradition and experience, and a willingness to embrace dramatic cultural differences. This newfound appreciation was of profound importance for my personal development, and will be incredibly instructive in my future study of international and comparative law.