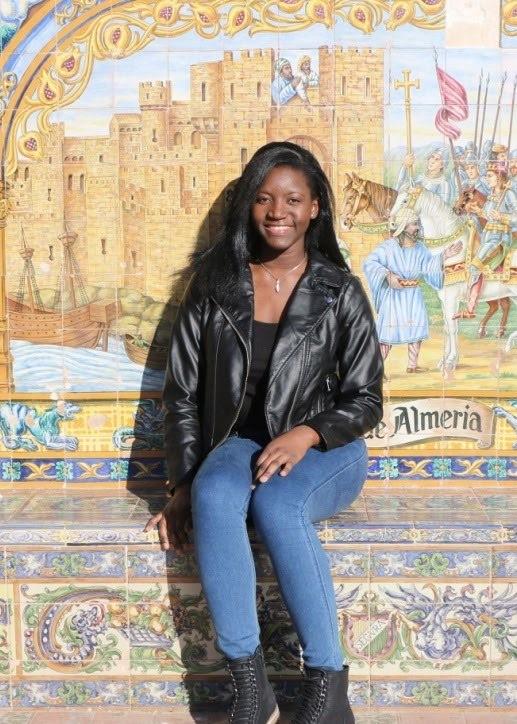 Kayele Silue spent spring 2018 studying abroad in Comillas, Madrid. A finance major and an international student from Cote d’Ivoire, Kayele found that “studying abroad confirmed that getting out in the world, living with people from another background and learning part of their culture is an undeniable source of growth, and one can never have enough of that." Read more about Kayele’s experience here.

What made you want to study abroad in Madrid and at Comillas?

I have wanted to study abroad before I even started my first semester as a Freshman. After accepting my offer to attend CWRU, I read about the university’s study abroad program, which I perceived as a great opportunity to push my exposure to the world by being immersed in another culture, and I just knew I could not miss it. At the end of my first semester, without any specific destination in mind, I reached out to the Education Abroad department to learn more about my options as well as other aspects of the program such as finances. I knew I was very early considering that I did not plan to study abroad before the second semester of my sophomore year; however, I was too excited to wait. My enthusiasm was matched by the support of the Education Abroad counselors I have worked with since taking that first step, and that was even more motivating. My choice for Madrid and Comillas was progressively made after discussing with a counselor, who helped me narrow down my options to a few universities based on cost and my interest in their respective countries. I elected Comillas from that shortlist and decided to spend a semester in Madrid because of the great reputation of the university, my high interest in the Spanish language, and my curiosity about Europe in general.

While I was studying abroad, I missed my US-based host family a lot since it was my first time being away from them for so long. Since I struggled a lot with Spanish, I also really missed the comfort of speaking English and easily getting my point across, although I knew that struggle was well worth it. Now that I’m back in the US, I really miss Spanish food, especially tortilla and café bombón. I also miss the warm and friendly way Spanish people greet each other, which reminded me a lot of my home country.

Name one thing about studying in Madrid that you had heard about before studying abroad and were surprised it was actually true?

Before going abroad, I spoke to several study abroad veterans, who all insisted about how much fun it would be, and the accuracy of their words really surprised me. As an international student at CWRU, I consider my entire undergraduate studies as a study abroad program, so I started college envisioning all the fun and adventures one would expect from studying abroad. Although I try to get close to that vision, I find myself prioritizing academics since I care a lot about my grades. For that reason, I expected to enjoy my time studying abroad, I thought I would also spend most of my time studying and that the fun would only come from everyday deeds such as being surrounded by and talking with people from a different background, eating Spanish dishes, taking the metro with locals, etc. – a.k.a. being immersed in a new culture. I certainly had fun doing such mundane things, but I had a lot more fun just like everybody had predicted. I still worked very hard to make sure I remained on top of academics, but I was consistently able to balance that with all sorts of deliberate, fun activities. I think being in a beautiful country such as Spain, which was completely new to me, and having very limited time there really raised my urge to get out and do as much as possible outside of school. Therefore, I equally invested my time inside and outside the classroom, at that resulted in my semester abroad being the most fun so far!

What is something that you found shocking when you first arrived in Spain?

When I first arrived in Spain, I was pleasantly surprised by how nice and helpful people were there. I struggled with the language a lot in my early days and had a hard time communicating. However, from the taxi driver from the airport to Spanish students in my class, everyone who knew some English or French tried to accommodate me by translating key information into one of the languages I was more familiar with when absolutely needed. That was a really good surprise and it sure facilitated my experience and gave me the confidence to approach the locals with my then-imperfect Spanish skills since I knew how compassionate they would be.

What are some similarities and differences between life in the U.S. and Spain?

The US and Spain both have international shopping brands and food chains that were definitely familiar when I first arrived. At the same time, there are lots of smaller shops and cafes that are specific to Spain, and which were really nice to explore. Another major difference between Spain and the US is that Spanish people in general really dress to impress; therefore, by trying to blend in, you also end up looking very nice most of the time, which is pretty satisfying. Public transportation is also much more popular in Spain compared to the US, and it is very common to take the metro on a weekday and see all sorts of people, from fashionable young adults all the way to older people in business formal attires.

Both CWRU and Comillas are rigorous universities with great reputations, so a similarity of studying at both institution is that academics remain important and appropriately challenging. Also, just like at CWRU, the faculty at Comillas was of really good quality, offered valuable feedback, and was always willing to help inside and outside the classroom. For me, the main difference between both universities was that Comillas does not have dorms and all students commute to and from the school. I personally lived close to the school, so my commute was similar to the one at CWRU; however, having my classmates live in scattered locations around Madrid instead of all being within walking distance of each other like at CWRU took some adjustment at first. Nevertheless, that arrangement made hanging out more common and more natural for me since I sometimes had to go across the city just to see friends, and that really allowed me to discover several parts of Madrid.

Studying abroad in Madrid confirmed that getting out in the world, living with people from another background and learning part of their culture is an undeniable source of growth, and one can never have enough of that because every place, every people is unique in its own way and there is always something to learn from it.