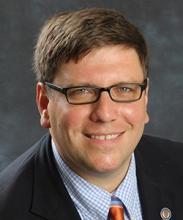 Prior to joining Global Cleveland as its top executive, Joe Cimperman served 18 years on Cleveland City Council, where he distinguished himself as a champion of the diverse peoples and cultures of Greater Cleveland.

Joe, an immigrant’s son, grew up in a Slovenian-speaking household on East 74th Street in the St. Clair-Superior neighborhood of Cleveland. He graduated from St. Ignatius High School and John Carroll University, where he was elected president of the student body.

In 1997, he began the first of seven terms on Cleveland City Council. His diverse ward included the businesses and corporate offices of downtown as well as the cultures of Asiatown, Tremont, Ohio City, and the old neighborhood.

Joe, a German Marshall Fellow, assumed the leadership of Global Cleveland in April of 2016. He and his wife, Nora, live in Ohio City with their two young children.