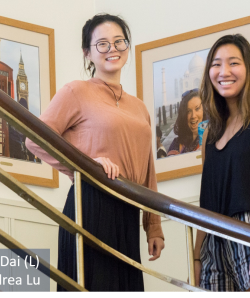 Andrea Lu and Weiwei Dai are CWRU students who have taken part in CWRU’s exchange partnership with Hong Kong Polytechnic University (PolyU).  Andrea, a biomedical engineering student at CWRU, studied abroad at PolyU for the spring semester of 2018. Weiwei, an applied mathematics student at PolyU, is currently studying abroad at CWRU for the 2018-19 academic year. Read on to learn more about these students’ experiences crossing cultures and living abroad!

Andrea: What made you want to study abroad at Hong Kong Polytechnic and in Hong Kong?

Being born and growing up in America, I wasn’t exposed to a lot of Asian culture. I knew for a really long time that at some point I wanted to study abroad in an Asian country so that I could learn about the different cultures through experience. After looking at the programs in Asia that CWRU offers, I became really interested in Hong Kong because of the fact that it was once a British territory. After looking at some other programs, I finally settled on Hong Kong because I wanted to see what it was like to live in a country that had heavy cultural influences from both the West and China. Hong Kong Polytechnic was a great choice as an institution because of its location. The university is really close to the metro station (you walk through the metro station on your way from the student halls to class), and there are amazing restaurants, bakeries, and stores within walking distance.

Weiwei: What made you want to study in the U.S. and at CWRU in particular?

I plan to come back to the U.S.A. for my Master’s degree, and I thought it would be a great idea to go for an exchange first and experience the academic atmosphere as well as the life here.  After research, I found that CWRU is a school with a very good academic atmosphere, and I want to see the heavy snow (there is no snow in my Hong Kong), so I chose CWRU.

I definitely missed my friends and family the most while I was studying abroad. I didn’t know anyone when I went to Hong Kong, so I ended up making all new friends. At times, the cultural and language differences could be challenging, so I found myself wishing I could just go to a friend or family member from back home to talk about things. However, the friends I made abroad are now some of my closest friends because of the experiences we were able to share with each other. Right now, the thing I miss most about my study abroad country is the food. Everything was delicious and extremely cheap. I could eat three meals a day for under $15, and there were bakeries on almost every corner by my student halls. I miss being able to wake up in the morning and walk 5 minutes to pick up some delicious red bean buns.

Weiwei: What do you miss most about your home country?

Public transportation…in China, especially Hong Kong, we go out mostly by subway. It is very fast, cheap, and it has more than 12 lines which cover almost every part of the city. It is very convenient. However, in Cleveland, although the RTA is free for Case students, it can only reach limited places and you will have to wait for another hour when you miss one. It is really inconvenient if you do not have a car…

Andrea: Name one thing about studying in Hong Kong that you had heard about before studying abroad and were surprised it was actually true?

Before studying abroad in Hong Kong, I had heard that a lot of the studying the locals did happened in the couple weeks leading up to final exams, and the locals really didn’t tend to show up to classes or study during the rest of the semester. I thought this wouldn’t be true, but I learned pretty quickly that the local students really would skip a majority of the classes. There were almost no homework assignments, so skipping class didn’t really affect any grades in that way. I saw some of my classmates for only the second time during our final exams. If we had a midterm (which didn’t really happen), the local students could be seen furiously writing in their notebooks while they tried to cram for the test.

Weiwei: Name one thing about studying in the U.S. that you had heard about before arriving and were surprised it was actually true.

Before I came here, I heard that Case students work very, very hard and sleep very little. I thought it would be just the several days during the final exam period. After I came here, I found that everyone stays up so late even at the beginning of the semester to do homework…I used to hear a lot of people say that Chinese people are hardworking, but actually college students in the USA are much more hard-working than us.

Andrea: What is something that you found shocking when you first arrived in your study abroad country?

Something that I found shocking when I first arrived in Hong Kong was the number of nature spaces that are both in the city and surrounding it. I was able to get on some form of public transportation and travel 30 minutes to end up on a beach, a dock to travel to the surrounding islands, a trail head to hike up a mountain, or an entrance to a jungle path. I thought that Hong Kong would be all tall skyscrapers (which it definitely has a lot of), but I was able to walk around beautiful parks and do so much hiking that, sometimes, I forgot I was in a big city.

Weiwei: What is something that you think would shock someone from the U.S. about the culture in your home country or at your home university?

We love chicken feet!!!  It is a delicious cuisine in China!

Andrea: What are some similarities and differences between life in the U.S. and your study abroad country?

There are actually a lot of similarities between life in the U.S. and in Hong Kong. Because Hong Kong is so westernized, the bigger districts tend to closely resemble an area you could easily find in a bigger U.S. city, especially since a lot of people in Hong Kong speak English in addition to Cantonese. The biggest difference I noticed from living in Hong Kong was really the methods of transportation. In the U.S., you really need a car in most states to be able to easily travel from place to place. In Hong Kong, it’s almost silly to have a car because of how bad the traffic tends to be and how amazing the public transportation is. During rush hour, there’s so many people in the metro stations that you really can’t do anything except shuffle your feet and try not to trip over someone. I remember the first time I used the metro during rush hour, I thought it was going to take me at least half an hour to get onto a train. I was definitely wrong. The public transportation is extremely organized and effective, so during rush hour, a new train arrives within seconds of the departing train, and the crowd of people shuffle forward to fill the new train in an orderly fashion. It’s a pretty amazing sight to see.

Weiwei: What are some similarities and differences between life in your home country and the U.S.?

Actually, most parts of student life are similar. We have three meals per day, do exercises a few times per week and take part in various extracurricular activities after class. But I think activities at CWRU have more free food! And they are more interesting.

Andrea: What are some similarities and differences between studying at CWRU and abroad?

Studying at CWRU is very different from studying in Hong Kong. I only had about three homework assignments and a lab report between the four classes I took, and the majority of my grade for all four classes was from the final exams, with each final exam being worth at least 60% of my final grade for that class. Taking the final exam was also very different. At CWRU, you typically take your exams in a lecture hall or classroom, and a lot of the times, it’s in the room you took that class in. At Hong Kong Polytechnic, multiple classes (5+) were put into a gym that had rows of individual chairs lined up. You were assigned a specific row number and seat to sit in for your exam, and the professors all stood at the front of the gym. They administered the test and rules through the overhead speaker since there were so many students. Taking my final exam was actually pretty difficult because this test setting was so uncomfortable to me compared to how CWRU administers final exams. Another difference is that classes at Hong Kong Polytechnic tend to be 3 hours once a week or 1.5 hours twice a week.

Weiwei: What are some similarities and differences between studying in your home country (or at your home institution) and at CWRU?

There are a lot of similarities, for example, we also suffer from morning classes, worry about exams and struggle with long essays. But the class schedule and work load are quite different. For the 3-credit course, we will normally have a 3-hour seminar or a 2-hour lecture plus 1-hour tutorial within a day instead of three 50-min lecture for 3 days. Also, the courses of Case get much more regular homework. In the mathematics courses I am taking, I get regular homework for every lesson! However, by doing more regular practice, I do find I have a better understanding of the knowledge.

Andrea: How has your global perspective changed since you studied abroad?

I don’t think there is any aspect of my global perspective that hasn’t changed since studying abroad. Not only was I able to learn about Hong Kong, but I was also able to learn about other Asian countries since traveling is so affordable in Asia. I got to see how people live their lives in Thailand, Malaysia, Singapore, and Vietnam. On top of the traveling, there were the friends I made were from all over the world. We would have conversations about politics and cultural differences, so I learned a lot about how other countries view America and was able to educate myself more on how my friends’ lives in other countries differ from mine. I was really surprised to learn about how much students in other countries learn about our country compared to how little we learn about the rest of the world during our history lessons. Studying abroad, as cheesy as it sounds, was a life changing experience. The interactions I had with both locals and fellow exchange students are unforgettable, and I will never forget the experiences I was able to have all over Asia while I was there.

Weiwei: How has your global perspective changed since arriving in Cleveland?

People in Cleveland are really kind and welcoming. People in Hong Kong don’t like to talk to strangers, and the atmosphere is a little indifferent. However, in Cleveland, you can always start an easy conversation even with the people waiting for the bus beside you. It feels very sweet.