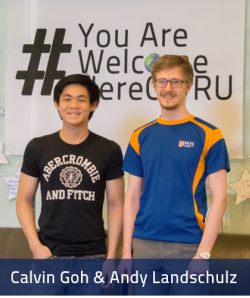 Calvin and Andy have both taken part in CWRU's exchange partnership with the National University of Singapore. Calvin, an NUS student, studied at CWRU during the 2017-2018 school year.  Andy traveled to Singapore for his exchange experience before returning to CWRU to complete his studies.  Read on to learn more about these two students’ experiences crossing cultures and living abroad!

Calvin: What made you want to study in the U.S. and at CWRU in particular?
I wanted to broaden my horizons by experiencing different cultures; that allows me to step out of my comfort zone, and I feel the exposure to different styles of teaching as well as interaction with students from different backgrounds will be beneficial to me as a future educator. The unfamiliar environment would also help to optimize growth in terms of mindset and expression.

Additionally, it offers me the opportunity to explore various birthplaces of literature in order to better understand its shifting function from the pre-modern to the contemporary world, where more and more people are starting to see the value in studying literature. Nevertheless, this ‘value’ is not viewed as intrinsic, but is rather one that has to be ‘sold’, i.e. arguments must be made to present the humanities as a subject worth studying. Visiting another university that operates under a different system would be helpful as there can be mutual learning across cultures, to better sieve out what works and what doesn’t in the classroom.

Case Western Reserve University offers a vibrant campus life and a broad-based education that does not restrict learning to traditional boundaries, allowing students to pursue their interests without limits. There are a few modules that are not offered locally [in Singapore], but I feel are important in helping us develop our sensitivities and respect for others, especially in an increasingly globalized world. I believe that this opportunity would provide me with a greater understanding of the different outlooks towards literature and anthropology, as well as different modes of pedagogy that may have practical applications.

Andy: What made you want to study abroad in Singapore and at the National University of Singapore in particular?
I knew I would eventually want to work in Singapore, so the chance to make some local connections and experience is invaluable.

Calvin: What do you miss most about your home country?
Friends, definitely. I still keep in contact with them, but the 13-hour time difference makes it hard to maintain any conversation for very long.

Calvin: Name one thing about studying in the US that you had heard about before arriving and were surprised it was actually true.
I heard that studying in the U.S. was more stressful in terms of workload, which, upon looking at the required texts, turns out to be the case! The pace of the classes is a lot faster than what I am used to, and it took a while to get used to the ton of readings assigned each week.

Andy: Name one thing about studying in Singapore that you had heard about before studying abroad and were surprised it was actually true.
I was surprised at how intense the students actually were. During presentations' Q&A sections they would be extremely active, with students primarily trying to shoot holes in the presenters' arguments.

Calvin: What is something that you think would shock someone from the U.S. about the culture in your home country?
When it comes to education in Singapore, there is always the pressure of the bell curve looming above us, which I feel has both its pros and cons. On one hand, the competition would push us as individuals to deliver the best we can. On the other, it breeds a sense of ‘kiasuism’ (fear of losing) among students, in which students see each other as direct competition, which is not exactly the most ideal environment to make friends in.

Andy: What is something that you found shocking when you first arrived in Singapore?
The food was so cheap and so good. It was cheaper and of higher quality to go to a hawker center for a full meal than to McDonald's.

Calvin: What are some similarities and differences between life in your home country and the U.S.?
The biggest difference I noticed when I arrived in U.S. is the accessibility and availability of arts and culture. In Singapore, the general population tends to see arts performances as something cultured that caters more to the higher-class in society, especially when it comes to ticket prices, which are usually a huge deterrence. In the U.S., there are a whole range of weekly performances at affordable cost, and one can usually decide on the day itself if they want to just drop by and watch a concert.
When it comes to similarities, I suppose the way students dress is quite standardized. There was a recent debate over an ‘appropriate’ dress code for university students in Singapore, which received quite a bit of backlash from the students. I feel that, at this age, it is the individual’s responsibility to dress themselves without necessarily policing – after all, it can be considered a form of expressing oneself, and so long as it is decent, I don’t see a problem with it.

Andy: What are some similarities and differences between life in the U.S. and Singapore?
In Singapore, most live in rent-controlled apartments, cars are extremely expensive and limited, the public transit is great, and taxes and wages are both very low. Most people speak English.

Calvin: What are some similarities and differences between studying in your home country and at CWRU?
I think one of the biggest differences is the timetable. Back in NUS, our classes are either 3-hour long seminars, or 2-hour lectures and 1- to 2-hour tutorials, so most of the time we only meet once a week for class discussion. This means that during the week, once the class is over, I will put aside my readings and work until the weekend. In CWRU, however, the classes are scheduled on Monday Wednesday (Friday), or Tuesday Thursday, which I feel helps in terms of consistency – there are at least two sessions per class each week, and students are required to prepare for them during the week itself.

As for the mode of education – in NUS, many classes are lecture-based, in which we sit and take notes as the lecturer speaks, whereas in CWRU, the classes are more discussion-based, which encourages active participation and generation of ideas.
Similarities can be found in the submission of online posts – we also use an online forum platform to converse with classmates and professors, although there is usually less incentive to do so.

Andy: What are some similarities and differences between studying at CWRU and abroad?
In Singapore, classes are largely once a week, there are only one to two assignments per semester, and essentially all finals are taken in the gymnasium. But class sizes are largely the same.

Calvin: How has your global perspective changed since arriving in Cleveland?
For starters, this exchange is the first time I’m travelling solo, which naturally gives rise to both feelings of anticipation and apprehension. The opportunity to travel and stay in another country for an extended period of time requires one to have an open mind, especially when the culture is different from what I am used to. As an exchange student, we were warned about the potential homesickness we may feel, but I have yet to experience any of that (thankfully), mainly because the environment and culture is so varied and rich, which is surreal and liberating. One of the differences I feel would be the willingness to address delicate issues, which a more conservative society may shy away from, and it was interesting to learn how these issues are handled. There is usually an adjustment period when we encounter something unfamiliar, but I feel that the community has been instrumental in welcoming me into its midst, and for that I am really grateful.

Andy: How has your global perspective changed since you studied abroad?
It was really interesting to discuss politics with Singaporeans. It was especially enlightening to discuss matters of foreign policy, as Singapore is a city state, and can't feasibly make the same gambits as a world power can.