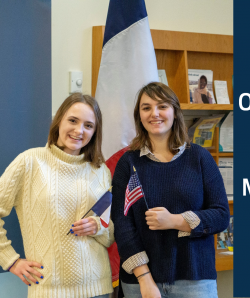 Jeanne, what made you want to study in the U.S. and at CWRU in particular?

I chose the United States first of all because I wanted to improve my English (and I don’t really speak any other language!). I also studied the US history, foreign and national policies during my first two years at Sciences Po and spending a year in America seemed obvious to perfect my knowledge in those fields. I have been to the United States before,and I really liked it, but it was just for a couple of weeks. Sciences Po gave me the opportunity to spend an entire year here (all Sciences Po students have to study abroad during their third year of college), and I seized it.I found CWRU in the list of partnerships we have with American universities.It is not famous in France, not at all actually, but the academics looked very good and interesting, and that is why I applied. Cleveland, however, was famous, mainly because of basketball and LeBron. Finally, I wanted to travel, and the great geographical position of the city (at the crossroad of Canada, Pittsburgh and Chicago) confirmed my choice to come to CWRU.

Eliana, what made you want to study abroad in France and at Sciences Po?

I had taken French language courses for about eight years before studying abroad and was excited to practice using the language. I wanted a program where I could use French but also take courses in English related to my majors, and Sciences Po was a brand new program choice that fit these specifications. I visited France when I was 16 and wanted to go back, as well.

Jeanne, what do you miss most about your home country?

I could say I miss my family and friends but what I actually miss the most, without hesitation, is French food!! I miss the food we can find in restaurants, the quality of our groceries, but also particular foods like French cheese, charcuterie or our great bread of course, that you can’t find in America. Fun fact, some kinds of French cheese are actually prohibited in the US because of the way it is made by our cheese makers! I also miss the way I was living, alone in my own apartment, which is not common for students in the United States. I miss the proximity of everything: bars, small shops etc. In France, you can basically do everything by foot in most cities, and I miss that. In America, you need a car for nearly everything, which is annoying when you come to study here for a year only and you definitely don’t have a car.

I missed US customer service and businesses being open all the time. Sometimes I would want to get food, go to the grocery store, or go to a pharmacy late at night and I was not able to. Now I miss the food in France, both in terms of groceries and food at restaurants. The quality of ingredients I was able to cook with on a regular basis was incredible, and so was the food prepared by restaurant chefs. I also thoroughly enjoyed being in champagne country!Jeanne, name one thing about studying in the US that you had heard about before arriving and were surprised it was actually true.Before coming in the United States, I heard that medical care was extremely expensive and unfortunately, that revealed itself to be more than true. Coming from a country where most of your medical expenses are taken in charge by the social security (an amazing invention), it was a bit bizarre to pay for my medicines at the pharmacy. I was expecting it, but still, I was not used to it.I was also surprised by the way American campuses work: it is a real city within the city,with its own apartments, shops, restaurants... We don’t have such things in Europe; most students live in individual apartments all around the city and what we call a “campus” is usually the one building where you have your classes. For most universities, they have buildings pretty much everywhere in the city, here in America, everything is concentrated, which is an interesting dynamic.I was not surprised though by the academic standards I found at CWRU: the professors are great and all my classes are extremely interesting.

Eliana, name one thing about studying in France that you had heard about before studying abroad and were surprised it was actually true?

I had heard that the French have a different way of running their classes, which is true. Grades are on a scale of up to 20, and, at least at Sciences Po, more emphasis is placed on presentations and essays. I really liked how each class scheduled everybody's presentations at the beginning of the semester so that students knew when their work was due and could plan accordingly.

Jeanne, what is something that you think would shock someone from the US about the culture in your home country or at your home university?

Something that can easily shock Americans in France is, to my opinion, how cities are organized. Everything is smaller, older, and not built around roads like in the United States. When talking to Americans who have been to France, it seems that the amount of people smoking in the streets or at parties is also disturbing for them. In France, we consider that smoking is an individual decision, and it is seen as a way to socialize, just like sharing a bottle of wine. We also have a different food culture: we enjoy having meals with our friends and families and therefore, eating alone or on the go is something very unusual, including during work days.Finally, Sciences Po is a school of political sciences; we are formed to be tomorrow’s politicians and leaders of the nations or of the biggest companies in France. CWRU is mostly a science and engineering school, therefore you can find differences in the kind of events we organize. At Sciences Po, we have lots of talks with very prestigious guests (Justin Trudeau, Mario Draghi, Kofi Annan...) debate contests, lectures about feminism... And many associations are built around social sciences or politics. In CWRU, you have more diversity in terms of events.

Eliana, what is something that you found shocking when you first arrived in France?

I was surprised by the number of dogs everywhere. This trend continued throughout my extended time in Europe--Europeans have no problem bringing dogs into stores, which was so much fun!

Jeanne, what are some similarities and differences between life in your home country and the US?

We share a western, occidental culture, so I guess you can find a lot of similarities between France and the Unites States. However, I noticed that life is more expensive in the United States, especially in terms of food and medical expenses. We don’t have the same understanding of space: when having a car in the US is normal, nearly vital if you want to do your grocery shopping in a supermarket and not in a convenient store, you don’t need one in France since most of the shops are in the middle of inhabitations. French people also enjoy casually going out on week days to have a beer or eat in a restaurant with friends and colleagues, I don’t think Americans do that kind of things. We have more holidays and paid leave, so we can afford to do such things without being exhausted at the end of the month.

Eliana, what are some similarities and differences between life in the US and France?

The leisure culture is much more relaxed in France than in the US. Eating food is more of an event in France--people generally do not eat on-the-go. The French also have very different fashion from Americans. The French listen to a lot of the same music as Americans, though!

Jeanne, what are some similarities and differences between studying in your home country (or at your home institution) and at CWRU?

Classes are organized in a different way at Sciences Po and CWRU. At Sciences Po, students usually enroll in at least eight classes. You only have these classes once a week, but they last two hours. At CWRU, people usually have less classes and spend less hours in classrooms, but the work load is similar, or maybe slightly lighter, than in Sciences Po. Another difference with studying in France is that everything is less “prepared” for you: you have to find your own apartment (there are no university housing), you don’t have advisors to guide you... You are pretty much on your own for everything, even if the administration of Sciences Po can be helpful.The grading system is also a difference: in France you get a grade over 20, we don’t use letter or percentages.

Eliana, what are some similarities and differences between studying at CWRU and Sciences Po?

Jeanne, how has your global perspective changed since arriving in Cleveland?

I opened myself to another culture. The American culture first, but also to another university culture than the one I knew before. I guess it challenged me, and eliminated my assumption that Americans were really similar to Europeans (they are not).

Eliana, how has your global perspective changed since you studied abroad?

I really think about the lives of individuals in other countries now, including the assumptions and habits that they take for granted that are similar or different to those of inhabitants of the US. I have a much broader perspective on the number of things happening in other countries that we do not hear about in the US. I feel much more comfortable traveling to unfamiliar places, even alone, and navigating interactions with people from different countries.