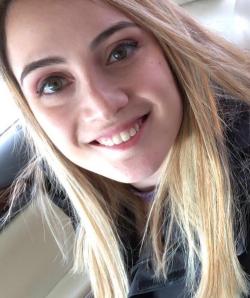 Lilianne came to CWRU from Lebanon to take advantage of the great undergraduate research opportunities. During her time in Cleveland, she found and an appreciation for America’s diverse cultures and became a Research ShowCASE award winner! Read on to learn more about this recent graduate and her global perspective!

Tell us about the Research ShowCASE and your experience taking part.

Research ShowCASE gives graduate, undergraduate, and high school students the opportunity to present their research, with the possibility of winning different prizes. I participated in the Michelson Morley competition, the undergraduate research competition in biological sciences. I presented a project that I had been working on in the Tesar Lab for almost four years, with the aim of providing a potential therapeutic for Pelizaeus-Merzbacher disease. The competition involved writing a paper about your research in the form of a journal article and then presenting to a panel of judges, and I ended up in first place.

What made you want to study at a US university and CWRU in particular?

I have actually always been interested in research, and so I chose to attend CWRU because of its undergraduate research opportunities. The SOURCE office provides lots of pointers for incoming students about how to get involved in research, and that gave me the opportunity to join the Tesar lab starting my first week of my first semester freshman year.Name one thing about studying in the U.S. that you had heard about before arriving and were surprised it was actually true. One thing that I had heard about and was surprised was true was the amount of freedom that I had with choosing what classes I took. I was able to take many electives, not only within my major, but also in subjects that had nothing to do with my major.

Name one thing you tried for the first time while studying a CWRU. Did you like it?

Studying at CWRU was my first time living on a college campus. I loved it because it was so much easier being close to my friends and classmates so that we could study together when we had work, or just hang out when we didn’t.

What did you miss most about your home country?

I mostly missed my family and friends, especially my niece. Although we can text or speak over the phone, it's definitely not the same as being there and being able to see them and hang out with them.

What is something you love about Cleveland?

One of the things I love most about Cleveland is that it is relatively close to a lot of other major cities (Chicago, Washington D.C., Baltimore, Pittsburgh). You could drive or take the train over the weekend and visit these other places, and that was one of my favorite things to do.

What is your favorite place to visit in the Cleveland area?

Definitely Barrio. I love trying new food places, and Cleveland has a lot of good food options. Barrio is definitely my favorite restaurant in Cleveland, and there’s one on campus!

What would you like to do after finishing your studies at CWRU?

I greatly enjoy doing research, and so I will be working at the New York Stem Cell Foundation and hope to later attend an MD/PhD program, as I would love to work with patients as well.

What advice would you give to other international students arriving to study at CWRU?

There’s a lot to do on campus and lots of people you could meet, and so I would advise them to try to get out of their comfort zone and try doing new things and meeting new people, maybe by joining some different organizations or clubs.

How has your global perspective changed now that you have studied in the U.S.?

The U.S. is a lot more diverse than my home country, and during my time here I have learned a lot about different cultures that I would have otherwise not been exposed to back home. This has helped me appreciate and enjoy different cultures.