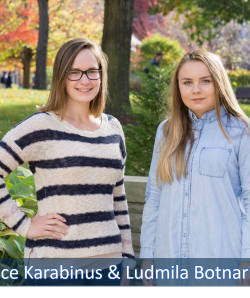 Ludmila Botnariuc and Grace Karabinus have both taken part in CWRU’s student exchange program with the American College of Thessaloniki (ACT), with Ludmila coming to CWRU while Grace went to ACT. Read on to learn more about their experiences studying abroad!

Ludmila: What made you want to study in the U.S. and at CWRU in particular?

The United States has some of the top universities in the world. These schools offer names with worldwide recognition that will help me find a great job in the future. I have chosen CWRU because it is ranked as 32nd among all universities in the US. I am really grateful that I have this great opportunity to study at CWRU. The US will help learn how to adapt to a different society and how to communicate more effectively.

Grace: What made you want to study abroad in Greece and at ACT in particular?

I chose to study in Greece because I’ve always been interested in its history and art and didn’t know much about the culture before coming to the country. I wanted to study in Europe, but I chose Thessaloniki because it is primarily a student city with strong Eastern-European ties. Also, I had heard that the country is beautiful!

Ludmila: What do you miss most about your home country?

I am from the Republic of Moldova but I am studying in Greece at ACT. What I miss the most about my home country are my parents. Now that I am in the US I started to miss Greece, especially the Greek coffee and the most beautiful beaches in Halkidiki.

I missed cheddar cheese. Greece has amazing cheeses, especially when fried and served on fire (!!!) but I hadn’t assumed that some of the grocery staples from my life in the US wouldn’t be available in Greece. For the most part, living in Greece did not provide a strong culture shock or require adjustment, but actually coming home was a much harder adjustment. What I miss most about Greece is the relaxed lifestyle and unending love for coffee.

Ludmila: Name one thing about studying in the US that you had heard about before arriving and were surprised it was actually true.

I have heard that American universities help their student to find jobs. I was really surprised when I saw how many opportunities CWRU gave me to find a job. I have been studying at CWRU for just two months and I am already a member of Handshake, where I can post my resume and see what internships or jobs are available.

Grace: Name one thing about studying in Greece that you had heard about before studying abroad and were surprised it was actually true.

I had heard that people have a much more relaxed schedule, and typically mornings start later and evenings end later, but I was surprised of the extent to which this was true. It wasn’t uncommon for me to see children out past midnight on a school night, or friends getting coffee at 11 pm. My classes didn’t start until noon, and they ended around 9 pm most days.

Ludmila: What is something that you think would shock someone from the US about the culture in your home country?

In Greece for example, there are no shops or even pharmacies opened on Sundays and rarely you could find something that is opened 24 hours.

Grace: What is something that you found shocking when you first arrived in your study abroad country?

Gyros in Thessaloniki are not served with the tzatziki that is all over the US (and served with other dishes), but actually with ketchup and mustard. Who knew?

Ludmila: What are some similarities and differences between life in your home country and the US?

For me, so far I have noticed only differences between Greece and the US, different mentality, a different way of speaking and in general different people. Drinking coffee in Greece is not just a habit. It is a daily ritual that you can enjoy alone while reading a newspaper or with friends in a busy cafe, in the summer outdoors next to the sea, during winter in a cozy saloon or on a road trip. Coffee breaks in Greece are serious affairs and last long. Usually, Greeks drink coffee and smoke a lot of cigarettes and this is something unusual to see in the US.

Grace: What are some similarities and differences between life in the US and your study abroad country?

In the US, everything moves at a super-fast pace. People are always rushing to or from something. In Greece, everything is more relaxed, and the entire lifestyle is different. There’s a siesta on Monday and Wednesday afternoons, which means that EVERYTHING shuts down. Family meals can last hours, and everything is very family-focused; people often live and work near where they grew up. In the US, I find that people aren’t tied as much to a specific place but are much more likely to travel across the country for school or a job, regardless of where they grew up or where their family lives.

Ludmila: What are some similarities and differences between studying in your home country and at CWRU?

ACT has a really small campus and I was surprised when I saw CWRU having such a big campus. The first day at CWRU I got lost. I was walking around with a map that helped me find my classes. When I told my friends from ACT that I have to walk 15 minutes from one building to another they were surprised.

Grace: What are some similarities and differences between studying at CWRU and abroad?

ACT was MUCH smaller than CWRU; there were about 300 students at the institution at the time, and my classes ranged from 10-25 students. I’ve had small classes at CWRU, but at ACT, I knew of or recognized just about every student in the school by the end of the semester. I found similar coursework, but classes themselves were very different because of the population of students and broad perspectives they brought with them. It was so cool to be in classes with students from so many different countries, since ACT draws students from all over the Balkans.

Ludmila: How has your global perspective changed since you studied abroad?

Study abroad is not just an experience or a trip. It’s my entire life being uprooted and placed down in an entirely unfamiliar country. I had to learn how to create an entirely new social group among a group of people that I didn’t have all that much in common with and this was my biggest challenge that I had in the US. My perspective has changed, on life, of the world, of my home and of everything in my life. However, it is hard to explain explaining exactly how my life has changed. I can say without any doubts that going on a study abroad was one of the best decisions I’ve ever made in my life!

Grace: How has your global perspective changed since you studied abroad?

I think living abroad for a long period of time brings a whole new perspective to the country (and where I came from!). I was able to experience and compare cultural differences more than I could if I was just visiting for a bit. I took classes in politics and globalization, which actually sparked my future plans in international law. It was so cool to meet students from all across the Balkans and hear how their life experiences were different from my own.