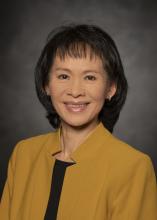 Ka-Pi Hoh is currently an organizational change management director at The Lubrizol Corporation. Dr. Hoh joined Lubrizol in 1988 as a research chemist. At Lubrizol, she has held a variety of leadership positions involving research technology, commercial development, operations and resource management including expatriate assignments in the United Kingdom and in China. She spent almost four years on assignment in China as the head of research, development and testing for Lubrizol Additives China. Upon her return to the U.S. in 2016, she was the operations manager for finished products, driving global initiatives on product development and commercialization excellence. She started her current role in 2018, managing the change aspects for the global SAP upgrade of Lubrizol’s ERP (Enterprise Resource Planning) system.

Dr. Hoh graduated from Case Western Reserve University with a B.S. in Polymer Engineering and a minor in Economics. She received an M.S. and a Ph.D. in Macromolecular Science from
CWRU. As a CWRU alumna, she is currently on the Case Advisory Board and chairs the Industrial Advisory Board for the Department of Macromolecular Science. She
is an emeriti board member for the Alumni Association and for the Flora Stone Mather Center for Women. She also serves as a professional mentor for WISER (Women in Science and
Engineering Roundtable).

At Lubrizol, Dr. Hoh is actively involved with Lubrizol’s diversity initiatives; she has been a member of Lubrizol’s Corporate Inclusion Steering Committee and is a founding member of the
Asia-Pacific Resource Group as well as Women in Lubrizol Leadership.

Dr. Hoh is the chair of the Board of Directors for The Lakeland Foundation at Lakeland Community College. She is a board director for the Lake Humane Society, Apollo’s Fire, and the Andy Nowacki Foundation. In China, she has an appointment as an Associate and Visiting Professor at the Zhuhai College of Jilin University.

In 2019, she was awarded Crain’s Cleveland Business Women of Note and was recognized as Crain’s Notable Women in STEM. She also received the 2019 Women of Achievement award from the Women’s Center of Lakeland Community College. In 2008, she was awarded the YWCA Woman of Professional Excellence.