Medicine, Society and Culture (MSC) students participate in one 10-week clinical rotation each semester, averaging at least eight hours per week of direct experience and observation. Students will select their rotations in consultation with their adviser and the program director, with a goal of securing practical experiences that deepen their understanding of topics covered in their foundations courses, as well as areas of specialized interest.

MSC concentration students also will be expected to take part in a capstone experience that is tied to at least one of the rotations. For example, students planning careers in the health professions might choose to spend both rotations in inpatient settings, while those with other interests might prefer to spend one of the rotations with an institutional review board or other research office. Some may wish to augment their clinical rotations with field research or write an original analytic paper with the goal of peer-reviewed publication.

Cleveland is increasingly known as a medical destination thanks to its extraordinary combination of outstanding private hospital systems, one of the nation’s largest and most-lauded VA medical centers, and a public hospital renowned for its success in treating trauma, rehabilitating severe injuries, and engaging throughout the community. The Hospice of the Western Reserve, where all bioethics degree students spend some part of their clinical placements, includes some of the most compassionate and insightful caregivers you will find anywhere.

One of the most renowned medical systems in the world, Cleveland Clinic is one of the nation’s top five hospitals, according to U.S. News & World Report, and nine of its specialties also are among the top five (with five of those in the top two). Its heart care has ranked first in the nation for 21 years.

Founded by a graduate of Case Western Reserve’s medical school, Cleveland Clinic has always been led by physicians—not only its CEO, but also its governing board and executive committee. Every doctor draws a salary, which means that compensation does not tie to tests ordered or procedures completed.

The system includes a main campus four blocks from the medical school, a major hospital in Abu Dhabi, another in Florida, a brain health center in Las Vegas, eight regional hospitals and 90 outpatient centers. In addition, Cleveland Clinic is partnering with Case Western Reserve to build a 485,000-square-foot Health Education Campus, scheduled to open in 2019.

The county’s public hospital offers the region’s only verified Level I Adult Trauma Center and Burn Center, hosts the Cleveland Functional Electrical Simulation (FES) Center and has been an affiliate of Case Western Reserve for more than a century.

MetroHealth treats anyone who comes through its doors, regardless of insurance or ability to pay. In one year the entire system—including 20 reginal centers, a skilled nursing facility and the main hospital—experiences more than 1 million patient visits, with more than 100,000 of them emergency room cases.

MetroHealth has been recognized for its advances in electronic health records and data analysis, and is also home to the Better Health Partnership, a region-wide collaboration supported by the Robert Wood Johnson Foundation. The partnership engages, educates, and coaches practitioners, conducts extensive research regarding a broad range of interventions, and creates and supports broad public health strategies.

The VA’s main tertiary hospital for Northeast Ohio is located within University Circle, just northeast of campus and across the street from the Cleveland Museum of Natural History and the Western Reserve Historical Society.

The Louis Stokes VA covers 24 counties and cares for more than 100,000 veterans per year—roughly 11,000 of them on an inpatient basis. In addition to its main Cleveland location, the center also has 13 multi-specialty clinics and as well as centers and contracted nursing homes.

The hospital also is affiliated with Case Western Reserve and includes many faculty among its researchers, and has been recognized for excellence in heart and diabetes care. It also has an active rehabilitation center. In recent years the main campus has seen multiple renovations and expansions to enhance and advance care. 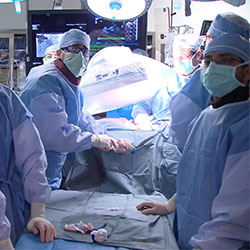 The University Hospitals (UH) main campus is immediately adjacent to the medical school and is its primary affiliate. All practicing physicians at the Cleveland campus hold faculty appointments, and it too has received recognition from U.S. News & World Report, with multiple adult and pediatric specialties ranked each year.

UH also operates 11 regional community hospitals across Northeast Ohio, and more than two dozen health centers, all of which offer outpatient care and several of which also have surgery suites and urgent care programs.

The hospital has been recognized repeatedly as among the nation’s top 50 hospitals by Diversity Inc. and twice named one of the world’s most ethical companies by the Ethisphere Institute.

Hospice of the Western Reserve

Begun as a modest cancer family service organization in 1970, the Hospice of the Western Reserve gradually evolved and expanded over the ensuing decades to meet Northeast Ohio’s growing needs. In 1984, its hospice became certified by Medicare, and a year later it received accreditation from the Joint Commission on Accreditation of Health Organizations. Today it offers three hospice homes and care centers, two bereavement centers, two resale and thrift shops and a home health care program. The organization also provides hospice care within local area hospitals and assisted living facilities, and provides support and guidance for families seeking assistance with palliative care.