The Life and Giving of Joan C. Edwards 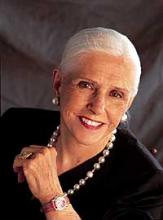 Joan Edwards had a long and influential history as a powerful philanthropic force in Huntington, West Virginia, where she lived the great portion of her life with her husband James Edwards. James, “Jimmy”, and Joan met while Joan was singing at Pittsburgh Pennsylvania’s William Penn Hotel. Joan, born Joan Cavill, had moved from London England to New Orleans at the age of four. By age 11, she was singing on the New Orleans radio station WWL. From there, her career as a jazz singer and performer included filming movie shorts, singing with orchestras, recording with Clyde McKoy and his Kentucky Band and performing in New York, Pittsburgh and Chicago. Jimmy and Joan married in 1937 and settled in Huntington, where Jimmy ran his business National Mattress Company. While running National Mattress, jimmy became interested in thoroughbred horse racing. Over the course of many years, he purchased six race tracks and the horse farm Virginia Audly Farms. Eventually, he became the West Virginia Horse Racing Commissioner.

In the early 1980’s Jimmy sold his interest in the race tracks to return to work at the National Mattress Company. It was during this period that he met Tom McDonald, owner and CEO of Thomas McDonald Partners Financial Advisors, Cleveland, Ohio, and work began on the creation of the Edwards Estate and Foundations. As the business relationship grew, so grew the friendship between Jimmy, Tom and Joan. When Jimmy passed away in 1991, Joan took over control of the estate and Tom remained her trusted financial advisor and friend for the remainder of her life. Collaboratively, Joan and Tom worked to realize the Edwards’ philanthropic goals. 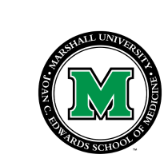 Mrs. Edwards died on May 7, 2006 after a long battle with cancer. She spent the last few days of her life receiving treatment and care in the cancer center she helped to create.

Before she passed, Joan worked closely with Tom developing long term plans for the Joan C, Edwards Charitable Foundation. Initially, the two collaborated on an idea to produce a jazz festival to celebrate Joan’s first love, music and performing. But as her experience with and reliance on adequate health care progressed in her life, she became more and more attuned to the importance of medical education. As a result Joan and Tom worked together to create the Joan C. Edwards Charitable Foundation. According to her wishes, the Foundation was to be dedicated to funding medical educations, particularly in communities experiencing a shortage of doctors.
As a Distribution Director named in the Trust Document along with Marshall Reynolds, Tom McDonald has worked to bring Joan’s vision of a nationwide system of scholarships to fruition.