Two Wheels Are Better than Four
Turning drivers into bikers could steer millions into the local economy. 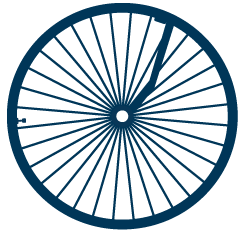 Bicycling is a lifestyle. It’s a way of showing that you’re the kind of person who cares about the environment; you’re the type who wants to remain active; and—it turns out—you’re the sort who can help bring in millions of dollars to Cleveland’s economy.

A group of Case Western Reserve MBA students recently wondered, what effect would changing a fraction of University Circle employees from drivers to bikers have on the local market? Their findings may surprise you.

Students Justin Held, Katharine Mann, Susanna Mohan, Leigh Orne and Tsung-Han Tsai conducted an economic-impact study commissioned by the GreenCityBlueLake Institute. They found that shifting just 3 percent of University Circle’s 82,000 workers from cars to bikes could boost the local economy by as much as $100 million. According to their report, enticing 2,000 individuals to pedal to work would lead to additional shopping for bikes, gear and apparel and also would spur the development of new stores and restaurants. On top of such benefits as fewer cars in an already congested district and a 1.6-million-dollar savings in health-related costs, they expect 500 new jobs to be born out of a biking boom—not to mention the environmental benefits of fewer exhaust pipes on the roadways.

Learn about other ways the students say a
bike culture could impact the city. ›