Go to case.edu
College of Arts and Sciences
Department of Dance

The Department of Dance Presents Imagatorium 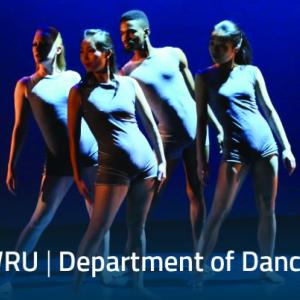 The Department of Dance at Case Western Reserve University is pleased to announce Imagatorium, the final production of the 2020-21 season, on May 2nd. The production will feature original works by second-year graduate students Mary-Elizabeth Fenn and Tingyu Xie, along with senior capstone choreographies by Zhaonian Li, Joel Kuebler Linebach, and Evangeline Robertshaw.

Wonderland, choreographed by Tingyu Xie, draws inspiration from the movie “Alice in Wonderland”. Thematically, this is a witty and humorous work with music by Raphael Beau. The dance walks through a utopia of three adventurous explorers and the Queen in Wonderland.

Mary-Elizabeth Fenn’s Tiny Conversations portrays four distinct characters boisterously exploring the space inside the Maltz Performing Arts Center as their playground. With music by composer Lars-Erik Larson, we see a glimpse of this quartet’s world and what goes on between them.

Choreographed by Zhaonian Li, Yielding…Strong probes the development and structures of movements. The work, with music titled “Reflections on the Nature of Water” by Jacob Druckman, also highlights the kinetic relationship between music and dance. The idea of paradoxical characteristics of water is presented in the movements, showing the contrast between the soft and the strong.

Joel Kuebler Linebach presents a solo work titled Entropy. Linebach’s work is inspired by the increasing and decreasing orderedness of the thermodynamic concept of entropy. The music consists of Linebach tap dancing in various rhythms and patterns, reflective of the work.

Choreographer Evangeline Robertshaw collaborates with Sarah Gotkiewicz and Denae Eldridge to present Sonder. The work aims to portray the realities of life in order to be appreciative of our current activities as humans, be they good or bad. The music is composed by Tourist.

Imagatorium premieres on May 2nd, and will be made available on the CWRU Department of Dance YouTube Channel.