ABRAHAM LINCOLN'S FUNERAL included a wake for the late president held on Cleveland's Public Square on 28 Apr. 1865. Lincoln had been assassinated in Washington, DC, on 14 Apr. Cleveland was one stop in a 1,700-mile rail journey to Springfield, IL, where Lincoln was buried on 4 May. The funeral train arrived in Cleveland at UNION DEPOT from Buffalo, NY, at 6:50 A.M., pulled by the locomotive L. Case. Another engine, the Dispatch, pulled the 9-car train to the Euclid St. Station, arriving at 7:20 A.M. After a 36-gun salute, pallbearers lifted the coffin onto a hearse, and the procession left the station at 7:30 A.M. Colonel JAMES BARNETT of the 1ST OHIO VOLUNTEER LIGHT ARTILLERY served as chief marshal. The procession included a local military escort commanded by Colonel WILLIAM H. HAYWARD; U.S. Army and Navy officers; Major General Hooker and staff; and governor of Ohio John Brough and staff. Six divisions, each with its own contingent of civic organizations, followed. The march route led up Euclid to Erie (E. 9th) St.; and then to Public Square by 9:15. 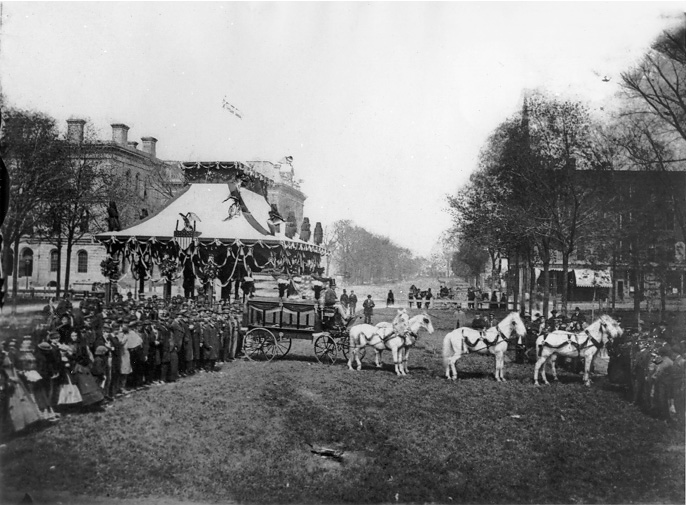 A crowd gathers at the catafalque on Public Square to view the body of Abraham Lincoln, 28 Apr. 1865. WRHS.

Lincoln's remains rested in a pagoda-style catafalque, which allowed local mourners to pay their respects in 2 moving lines. A portion of the 29th Ohio National Guard and the Veteran Reserve Corps troops stood as Military Guard of Honor. It rained throughout the day, sometimes quite heavily. Episcopal Bp. CHARLES PETTIT MCILVAINE conducted a short service for 9,000 people beginning at 10:00 A.M. Viewing began with the 29th Ohio National Guard, General Hooker and staff, and convalescents from the U.S. General Hospital on Univ. Hts. By 6:00 P.M., 90,000 people had filed by; the coffin was closed at 10 P.M. Leaving at 10:30 P.M., the 29th Ohio National Guard, the "Civic Guard," and police led the procession to Union Depot via Superior St. and Vineyard. They were followed by the hearse, the Military Guard of Honor, and the remainder of the civic organizations. The Military Guard of Honor placed the coffin on the funeral train, which passed through BEREA at midnight and arrived in Columbus, OH, at 7:30 A.M., 29 Apr.