The ACADEMY OF MUSIC was probably the most famous theater in the history of Cleveland and one of the most celebrated in the U.S. It was also among the nation's best drama schools. The theater was opened in 1853 by Chas. Foster of Pittsburgh, who ran it for a short period and then leased it to JOHN A. ELLSLER. The academy occupied the 3rd and 4th floors of a brick building on the east side of Bank (W. 6th) St. near St. Clair St. (Ave). The theater was 200' long, 80' wide, and 27' high, with an 80' by 60' stage. It had good acoustics and seated more than 2,000. Among its elegant and grand qualities were gas footlights and a high chandelier that hung from the center of the auditorium. 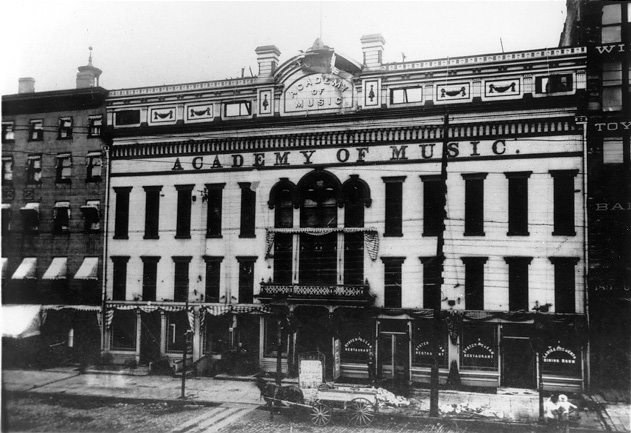 The first performance was The School for Scandal. In addition to the many great actors who trained at the academy, a large number of famous actors of the period held starring roles in its productions, including John Wilkes Booth, Charlotte Cushman, and Jas. O'Neill, the father of the playwright Eugene O'Neill. The Academy of Music was also known as the Natl. Hall (1853-54), Foster's Varieties (1854-55), the Cleveland Theater (1855-59), and the Theater Comique (1888). Partly destroyed by fire on 30 June 1889, it was quickly rebuilt, but then completely destroyed by fire on 8 Sept. 1892. Rebuilt as a dance hall, its walls were later incorporated into the Academy Bldg., a commercial structure.