The AMERICAN SHIP BUILDING CO., a major designer and builder of vessels for Great Lakes shipping, was incorporated in New Jersey 16 Mar. 1899 - a consolidation of 3 Cleveland firms: the Cleveland Ship Building Co., the Ship Owner's Dry Dock Co., the Globe Iron Works, and 5 other companies in the Great Lakes region. The Globe Iron Works, the oldest of these companies, was established as an iron foundry in 1853 by Samuel Lord and William McClelland.  Its first foundry building was located on the northwest corner of Elm and Spruce Streets on the west bank of the FLATS.  In 1869, Henry Coffinberry, John Pankhurst and Robert Wallace acquired a controlling interest in Globe Iron Works.

In 1876, Globe Iron Works purchased an interest in Stephens and Presley's Dry Dock, located just to the east of Globe's foundry, and started a new company called Globe Ship Building Company, naming as its president Henry Coffinberry, a naval veteran of the CIVIL WAR.  Initially producing only wooden hulled ships, in 1882 Globe Ship Building built and launched the first large commercial ship on the Great Lakes made of iron--the Onoko.  Four years later, the company built and launched the first large commercial ship made of steel--the Spokane.

Following a "dispute" among the partners, Coffinberry and Wallace left Globe Iron Works and formed the Cleveland Ship Building Co. in 1886. It occupied the old CUYAHOGA STEAM FURNACE CO. on the west bank of the Flats just south of Center Street. Pankurst remained at Globe Iron Works, which became a corporation in 1886. 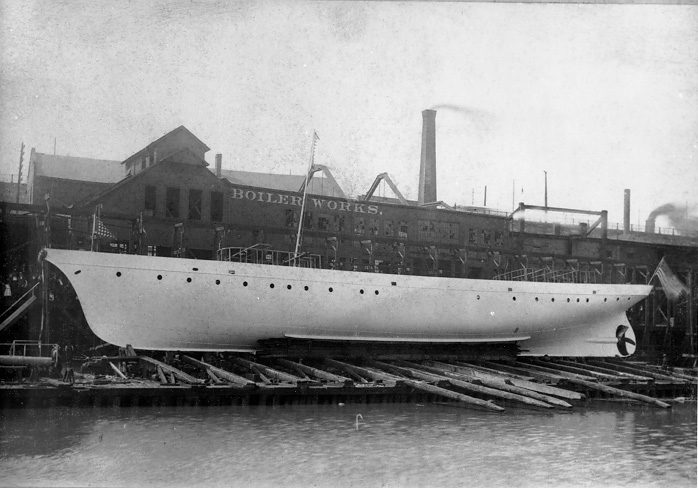 In 1899, a number of companies, including Globe Iron Works and Cleveland Ship Building Company, merged to form American Ship Building Co. This new company established Cleveland offices at 120 Viaduct and prospered in the early 1900s with the steel industry's increased demand for new ore carriers. By 1952 the company was the largest shipbuilder on the Great Lakes, but as lake shipping declined during the next 10 years, the company began to diversify its operations. A new group of younger investors gained control of the company's Board of Directors, making Geo. M. Steinbrenner, III, owner of the Kinsman Marine Co., the chief executive officer in 1967. After buying the Tampa Ship & Dry Docks Co. in 1972, the firm expanded its facilities there and moved its corporate headquarters from Cleveland to Tampa in 1979. Hit hard by the continuing decline in Great Lakes shipping and a strike that closed its shipyards in Lorain, Toledo, and Chicago in 1978-79, the company turned increasingly to defense contracts for its business and began to close its Great Lakes shipyards. It closed its Lorain shipyard in Dec. 1983.