ASSOCIATED CHARITIES, est. 1 June 1900 as Cleveland Associated Charities, evolved from a merger of BETHEL UNION (est. 1867) and the CHARITY ORGANIZATION SOCIETY (est. 1881) into the Bethel Associated Charities (1884). In 45 years it provided direct WELFARE/RELIEF in Cleveland to over 132,000 families and 500,000 persons. The creation of Cleveland Associated Charities as unattached to Bethel marked an attempt to separate RELIGION and private PHILANTHROPY. By 1904 the voluntary agency listed its name as Associated Charities; its first offices were at Bethel Associated Charities' Spring St. location. Associated Charities grew out of the Progressive desire for efficiency and professionalism and was supported over time by life members such as BELLE SHERWIN, NEWTON D. BAKER, CHESTER BOLTON, and FRANCES PAYNE BOLTON, to name but a few. JAMES BARNETT was president until 1908 and honorary president until his death. It attempted to coordinate city charitable work through a central registry for the needy (1905), the Committee on Cooperation (1907), the Charities Clearing House (1910), and the Charities Directory (published in several editions first by Associated Charities and later by the CLEVELAND FOUNDATION). In 1905 Associated Charities received 1,496 applications for assistance, recorded 4,662 home visits (made by trained Friendly Visitors), and provided 12,086 meals and lodgings at Wayfarers Lodge. It established the Ellen Garretson Wade Women's Work Fund (1914) which paid women to sew clothes and bedding to be given away, enabling mothers to stay home with their children. This evolved into the Sewing Center (1919). District committee chair Frances Lockwood Oliver convinced the association to hire a professional home economist (1918) to assist homemakers and families. Bequests, donations from women's societies (both secular and religious), private contributions, and endowments supported this work, which was implemented by many volunteers as well as trained personnel. 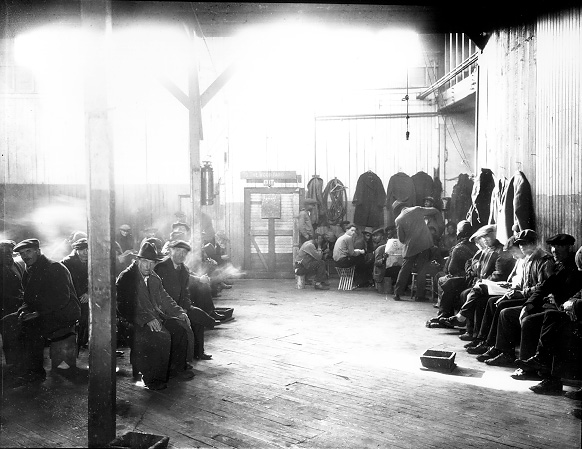 The Wayfarer's Lodge provided temporary shelter for people in need during the Great Depression, ca. 1930. WRHS.

Associated Charities fostered the founding and development of agencies such as the Anti-Tuberculosis League (see NORTHERN OHIO LUNG ASSN.), the CLEVELAND SOCIETY FOR THE BLIND, and the AMERICAN RED CROSS, CLEVELAND CHAPTER. Under General Secretary JAMES F. JACKSON (1904-26), the organization introduced training for social workers, a function later assumed by the School of Applied Social Sciences of Western Reserve Univ. (see CASE WESTERN RESERVE UNIV.). As a Community Fund agency, Associated Charities cared for over 43,000 families during the Great Depression of the 1930s. In 1933 the Cuyahoga County Relief Administration assumed much of this relief work and took over most Associated Charities staff and its 12 district offices. As Associated Charities Institute of Family Service, the agency then concentrated on family adjustment, rehabilitation, and preservation. It assumed casework responsibility for neglected children around 1943 in an attempt to keep them in their own homes rather than placed in foster homes or ORPHANAGES. In 1945 Associated Charities became the FAMILY SERVICE ASSN. OF CLEVELAND.