AUSTIN POWDER CO. is the oldest manufacturing enterprise in Cleveland. Begun in 1833 by the 5 Austin brothers to produce explosives used in blasting rock to build the canals, the firm opened plants in Akron and Cleveland. Austin Powder Co. Its Cleveland factory, bought from the Cleveland Powder Co. in 1867, at the 5 Mile Lock of the Ohio Canal (under the later Harvard-Denison Bridge), blew up in 1907.

Austin also built at GLENWILLOW, a rural community it developed in 1892, building homes for its employees, a town hall, a school, and a general store in the village. In the 19th century, Austin products were used in eastern coal fields, but its real periods of growth occurred in wartime. The government was the sole customer of the company's Glenwillow plant, where the workforce doubled to 200 to meet wartime demand. Because of the dangerous nature of the business, Austin powder manufacture was carried out in some 50 buildings at the Glenwillow site, and in other locations in 5 states. Headquarters were maintained in the ROCKEFELLER BLDG. in downtown Cleveland, then at 3735 Green Rd., and finally at 25800 Science Park Dr. in BEACHWOOD.

Though the company was safety-conscious, its history was marked by many explosions. As the isolation of Glenwillow ceased with the growth of neighboring suburbs, the company decided to close the plant and moved its Ohio manufacturing operations in 1972 to its plant in McArthur, OH. Beginning in 1985, Austin began a period of significant international expansion. In 1995 the company had operations in a dozen countries around the world, and over 1,400 employees. Almost all of Austin's products are sold to the mining and construction industries. David M. Gleason, a long-time Cleveland resident, was the company's president. 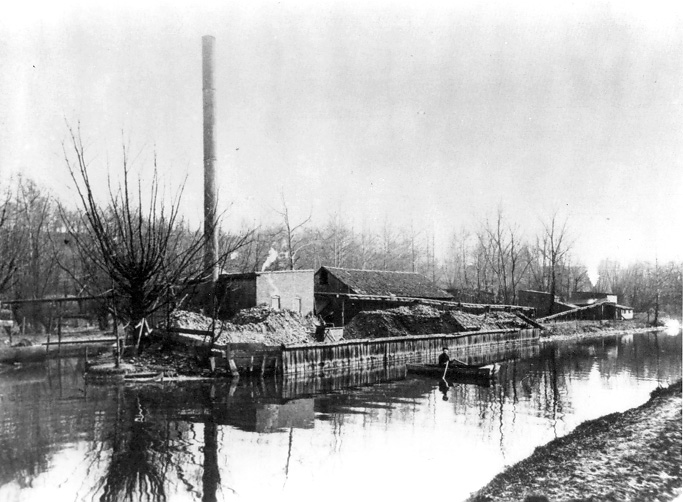 Charcoal Plant of the Austin Powder Company, near the Five Mile Lock of the Ohio-Erie Canal, ca. 1870. The facility exploded in 1907. WRHS.