BATH HOUSES were operated by the City of Cleveland from 1904-54, opening at a time when population density exceeded available bathing facilities. Humanitarians promoting cleanliness and Americanism first made public showers available to patrons of the settlement HIRAM HOUSE. Amid rising concern for PUBLIC HEALTH, City Councilman FREDERIC C. HOWE and others argued for placing public baths throughout the city. In the early 1900s, Howe was appalled to find that in a district of 4,500 people, only 8 buildings had any bathing facility. Residents with access to tubs often used them for coal bins or storage because they had no money for extra coal to heat bath water. 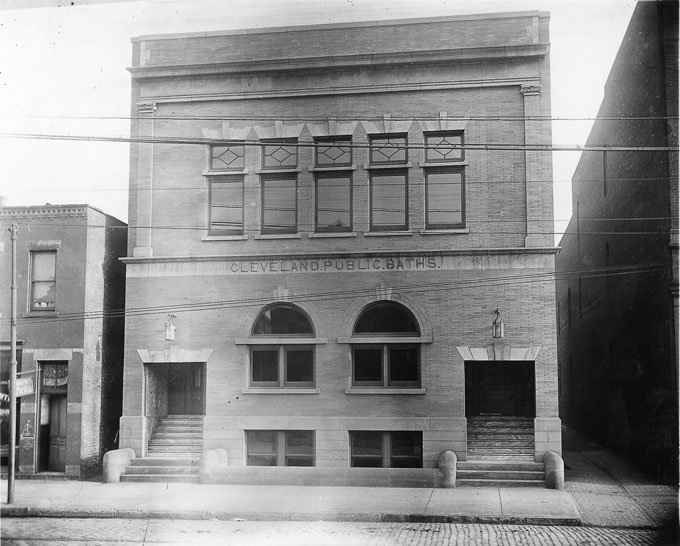 The exterior of the Orange Avenue Cleveland Public Bath House as it appeared early in the Twentieth Century. WRHS.

By 1904, a 3-story public bath house was constructed at 1609 Orange Ave., a former Hiram House property, offering soap and a towel plus a bath or shower for $.02. The Orange Ave. Bath House, run by the city, cost $28,000 to build and contained private and open bath and shower rooms, a gymnasium, and laundry. Clubs and sports classes met there. Seven other similar facilities soon opened, including the Broadway (1906) and the Clark Ave. (1908) bath houses. The price climbed to $.05 and then $.10; some houses added swimming pools. By 1929 only 2 of the facilities were used exclusively for bathing. Revenues fell, even in the Depression. Headlines in 1941 proclaimed the bath trade "washed up" despite 3 million baths recorded the previous year, and all but the Broadway facility were razed or converted to other uses. In 1954, due to the wide availability of in-home bathtubs and to high operating costs ($10 per bath), the city closed the Broadway Bath House, despite some protests that it still served the elderly, ill, and transients.