BLIZZARDS (snowstorms with constant winds over 35 mph) do not occur frequently in Cleveland, though heavy winter snowstorms are normal because of the proximity of Lake Erie and "lake effect" snows. In Cleveland, the worst blizzards listed in the National Weather Service records since 1871 occurred 9-11 Nov. 1913, 23-28 Nov. 1950, and 26-27 Jan. 1978. The 1913 blizzard, which paralyzed Cleveland and its suburbs, began as two storms, one from the Canadian Northwest, which missed Cleveland, and another from Georgia which merged over New York and moved over the Great Lakes. Freezing rain fell early Sunday, 9 Nov. That night, 60-mph winds blew out windows and spread fires for over 7 hours, and the barometer fell to 28.78"—a record at that time. Downed electric wires electrocuted horses, halted trolleys, and severed communications with other cities. Plowing was futile as 22.2" of snow fell in the 3-day storm. Thirty-two Great Lakes ships were lost or severely damaged, as 277 sailors died. The storm subsided Tuesday, and food and fuel deliveries were resumed in the central city, but fresh goods could not be found beyond E. 55th or W. 25th streets. A thaw began on Thursday as temperatures reached 44 degrees, and normal conditions returned by Friday. The Weather Bureau called the storm the worst in its records. 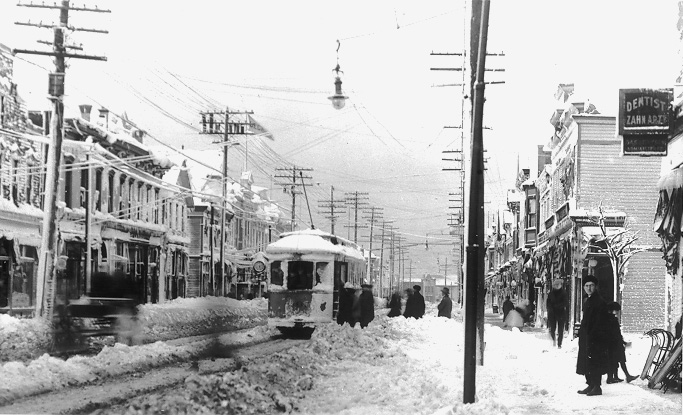 The blizzard of 1913 impedes traffic on West 25 Street. WRHS.

The 5-day 1950 Thanksgiving blizzard began when an arctic air mass lowered temperatures to 7 degrees. The next day, 24 Nov., low pressure from Virginia moved into Ohio, causing a blizzard with high winds and heavy snow which closed the airport. Mayor THOMAS BURKE called for the National Guard and mobilized snow removal equipment to clear the 22.1" of snow brought by the storm; however, snow drifts and over 10,000 abandoned cars blocked the effort. Burke declared a state of emergency, banned unnecessary travel, and later asked downtown businesses to stagger hours to reduce transit burdens. Nonessential cars were banned downtown. The storm weakened on Monday, but most area schools closed. The storm ended, and all guardsmen were dismissed by Wednesday, but Cleveland schools remained closed all week to keep children off transit lines. The auto ban lasted until the last CTS line reopened on Saturday; while parking problems remained, police no longer monitored traffic. Normal conditions returned as the temperature hit 53 degrees. The storm had paralyzed the area for a week and cost over $1 million and 23 lives.

The worst blizzard in Cleveland history hit early Thursday, 26 Jan. 1978 when low pressure from the Mississippi Valley met over southern Ohio with low pressure from the western Great Lakes. A cyclone formed as high winds rotated around low pressure, and the eye reached Cleveland about 4-5 A.M., lowering the barometer to a record 28.26". The temperature dropped 39 degrees in 6 hours. Sustained winds blew 53 mph with 82-mph gusts as the wind-chill exceeded -100deg. F, and 8" of snow fell. Hopkins Airport closed early with zero visibility. The Illuminating Co. sent 140 crews to repair 300 lines downed by wind and branches as 110,000 Greater Cleveland homes lost power. The blizzard, the third major storm of the winter of 1977-78, paralyzed much of the eastern U.S., preventing Mayor Dennis Kucinich's return from Washington, DC, and finance director Joseph Tegreene set up a command post as acting mayor. The National Guard was activated as Gov. James Rhodes declared a statewide emergency. Since the storm hit before workers could depart for jobs, RTA met the increased demand by adding 20 extra buses to its service, however many bus lines were rerouted because of closed roads. Except for I-77, all area freeways were closed by the storm, and the entire Ohio Turnpike closed for the first time. When conditions improved the next day, Hopkins Airport and all major highways and the turnpike east of Elyria reopened, and food supplies began arriving over the weekend. That winter was the city's second-snowiest ever.