The CADILLAC LOUNGE was one of Cleveland’s first gay-friendly bars. It was opened in 1946 by Gloria Lenihan, who owned a number of other night clubs in the city with her husband, Charlie Lenihan. The bar was housed at the corner of East Ninth Street and Euclid Avenue at the Schofield Building in a space that was formerly a shoe repair shop. 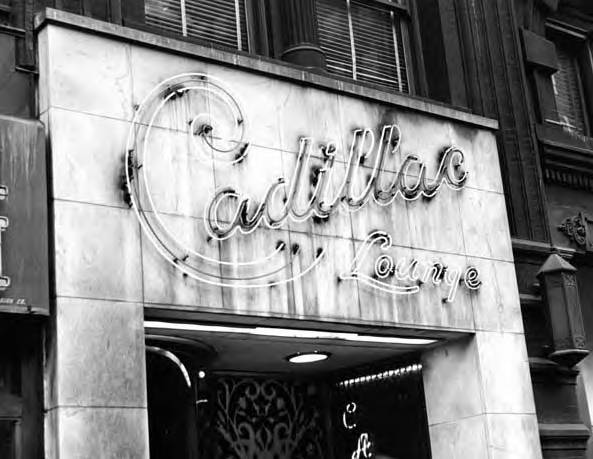 During the time it operated, the bar would host popular musicians when they were in town. These included Karl King, an electric saxophone player, James Parino, an electric organ player,  and piano musicians like Mr. and Mrs. “88,” Carl Dorner, Mr. Cholly Wayne, Ed White, Bill Eudy, and Carol Land.

The Cadillac Lounge had a reputation for strict rules and proper behavior. Men who sought to enter had to be wearing a shirt, tie, and jacket. Gloria Lenihan also enforced a “12-inch rule” which required that men be at least a foot away from each other at all times.

From time to time, the bar faced legal troubles, as it did in 1951 in a conflict with the Ohio Board of Liquor Control. The Cadillac Lounge was cited for after-hour sales of liquor on New Year’s Day, a Sunday, when it reportedly served liquor until 3 o’clock in the morning. The citations were dropped in July 1951.

In 1970, Gloria Lenihan attempted to move the Cadillac Lounge to Prospect Avenue and applied for a new liquor license in order to do so. However, she faced resistance from City Councilman Gerald McFaul, and the bar closed later that year. Its furnishings, including its cash registers, its sixty-foot-long mahogany bar, and its piano, as well as its liquor license, were auctioned off on April 10, 1970.

Since its closure, the Cadillac Lounge has been remembered as a significant part of the history of Cleveland’s gay community. The murals that once hung in the bar have since been featured at the WESTERN RESERVE HISTORICAL SOCIETY as part of an exhibit on Cleveland’s LGBT history. In 2021, the Kimpton Schofield Hotel, which operates in the former space of the bar, featured the Cadillac Lounge with a commemorative drink for Pride month named for the establishment.

View the LGBT Archives at the Western Reserve Historical Society