The CLEVELAND ARENA, located at 3717 Euclid and commonly known as the Arena, was built in 1937 for $1.5 million by local sports promoter ALBERT C. SUTPHIN and a syndicate of stockholders. Sutphin acquired the property of the Brush estate in 1935, and on 16 May 1937, ground was broken for the 10,000-seat facility, built primarily as the home of Sutphin's ice-hockey team, the CLEVELAND BARONS.Cleveland Arena On opening night, 10 Nov. 1937, it was host to the Ice Follies of 1938; it hosted its first hockey match a week later. By the 1940s, the Arena was hosting as many as 330 events a year, including rodeos, circuses, and a host of sporting events, from HOCKEY to 6-day bicycle races. High school BASKETBALL tournaments, college and professional basketball games, KNIGHTS OF COLUMBUS TRACK MEETS, and BOXING matches drew large crowds. The Arena was the scene of the tragic 24 June 1947 championship bout in which Jimmy Doyle died. It was also the site in Mar. 1952 of radio disc jockey ALAN FREED's Moondog Coronation Ball. Sutphin owned and operated the Arena until Apr. 1949, when he sold it and the Barons to a group of Minneapolis businessmen. Nick Mileti bought both the Arena and the Barons in 1968, but with the opening of the Coliseum in Richfield, the Arena ceased to host major events in 1974 and was demolished in early 1977. 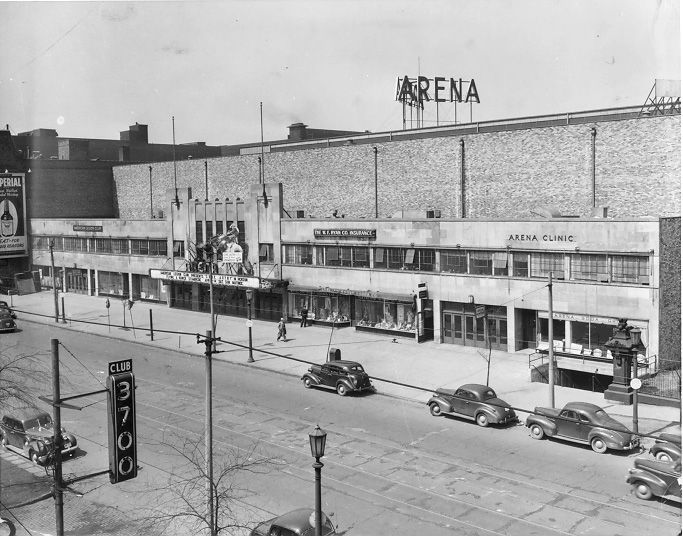